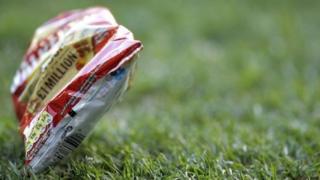 A recycling scheme for crisp packets has been launched today following protests earlier this year about the issue.

Environment groups have welcomed the move and hope that the public use it.

A spokesman for Walkers said: "Crisp packets are technically recyclable, the issue until now has been that they weren't being separated or collected for recycling.

"It is simple and free to use, all brands of crisp packets will be accepted and will ultimately be turned into other basic plastic items."

The paddleboarding plastic pick up

Kids on a mission to ban plastic straws

Meet the girl clearing up your sledges!

The crisp manufacturers have faced months of criticism for their plastic packaging with packets decades old being washed up on beaches.

Crisp packets: Should they be plastic-free?