Ireland independence: Why Jan 1919 is an important date 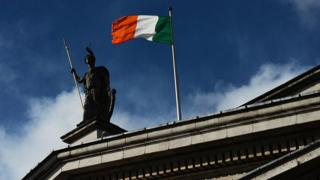 Today Northern Ireland (part of the UK) and the Republic of Ireland (an independent country) make up the island of Ireland.

But that wasn't always the case. Before 1921 the entire island, along with Wales, England and Scotland, formed the United Kingdom.

However, in January 1919 a group of Irish politicians declared Ireland an independent country, setting up it's own government in Dublin.

Although a war followed and Ireland wasn't recognised as a Free State by the UK until three years later, this was a major step towards creating the Republic of Ireland as it is today.

1801: Kingdom of Ireland becomes part of the UK, annexed to Great Britain under the Act of Union.

1916: A group stage armed rebellion in Dublin - the Easter Rising. They proclaim an independent Irish republic, but the rising is crushed by the British government.

Irish War of Independence breaks out.

1949: Republic of Ireland is declared, and leaves British Commonwealth. 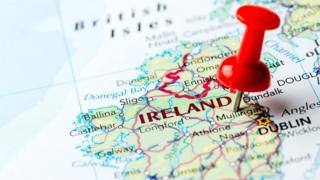 Did people in Ireland want independence?

Some groups in Ireland had long thought the country would be better off having its own government, and wanted independence from the rest of the UK.

The people who felt this way were called nationalists. Many of them were Catholic, who were the majority across Ireland.

Back in 1885, the UK Prime Minister William Gladstone proposed giving Ireland Home Rule - which would give Ireland the power to make its own laws, while staying as part of the UK.

But many people, particularly in the province of Ulster in the north-east of the country protested against it. These groups were referred to as unionists, and many were Protestant.

They said "Home Rule means Rome Rule", fearing they would lose rights they enjoyed as part of the UK, by becoming a minority in a mainly Catholic Ireland. 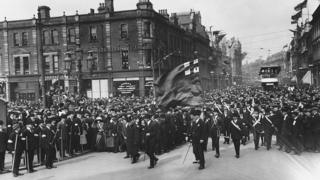 Getty Images
In 1912 hundreds of unionists in Belfast marched through the streets with banners to protest against Irish Home Rule, signing a covenant to say they would not accept it

Then in August 1914 World War One broke out. Home Rule, which was due to come in following the passing of the Home Rule Act of 1914, was suspended for the duration of the conflict.

However, while the war was going on, a group of nationalists staged a rebellion in Ireland in 1916, which came to be known as the Easter Rising.

They took control of the General Post Office in Dublin, proclaiming an independent Irish republic. The rising was crushed by the British government who arrested its leaders. Some were executed.

Although many people in Ireland didn't support the rising at the time, particularly as the UK was already at war, the decision to execute the leaders of the rising turned many people against the British government, and towards independence.

Many of the people involved in the 1916 rising joined together to form Sinn Féin - a political party, whose name in Irish means "We Ourselves".

Their aim was to campaign for an independent Irish republic, completely separate from the UK. 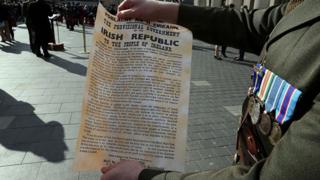 PAUL FAITH
In 2016, Ireland marked the 100th anniversary of the Easter Rising by holding commemorative events around the country

What happened in Ireland in January 1919?

For years, another political party, the Irish Parliamentary Party (IPP), had aimed to get Home Rule for Ireland.

The Irish public had supported the IPP since the 1880s, but Sinn Féin's aim of a republic began to seem more attractive to many people.

In December 1918 when the next election was held, Sinn Féin won a clear majority.

But instead of representing Ireland in the British Parliament, Sinn Féin announced they would instead set up their new Irish government in Dublin.

The decision to establish a republic was significant because it showed their determination to end all legal ties with the UK, rather than accept any kind of limited Home Rule as part of the UK.

They then set about adopting the Irish Declaration of Independence, deciding on a prime minister, establishing a new government, court system and police force. 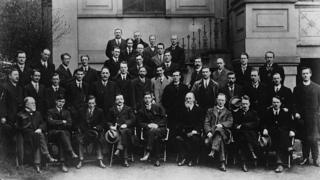 Hulton Deutsch
Eamon de Valera, who became president of the Irish Republic, is shown in the middle in he front row, along with the other Sinn Féin Leaders at the first Dáil Éireann

Why did this lead to war between Ireland and the UK?

On the same day this new Irish government was established, two members of the Royal Irish Constabulary - the existing police force backed by the British government -were attacked and killed by an armed nationalist group.

This armed group was called the Irish Volunteers, who later became known as the Irish Republican Army (IRA).

The Dáil hadn't ordered this attack, but as members of the Irish Republican Army gave their support to the Dáil they were regarded as the army of the new Irish Republic.

This sparked the Irish War of Independence, also known as the Anglo-Irish war, with the IRA fighting a guerrilla war against the British security forces over the next two years.

Atrocities were committed on both sides, and neither side could claim victory.

Guerrilla war: This is different to normal warfare because rather than open fighting, it involves lots of smaller-scale surprise and hit-and-run style attacks.

Because those waging a guerrilla war are often not an official army, may not have uniforms, and melt back into the civilian population in-between attacks, it's difficult to know exactly who the enemy is.

Civil war: A war between groups of people from the same country. 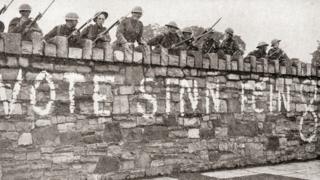 Getty Images
British troops guarding a wall during the Irish War of Independence aka Anglo-Irish War, in 1920.

When did Ireland officially become independent?

The war came to an end in 1921, with some leaders of Sinn Féin and the British government signing the Anglo-Irish Treaty in 1922, agreeing to peace and establishing an Irish 'Free State'.

This recognised Ireland's right to have its own government, and officially ended British rule there, although the UK monarch still retained some authority in the Free State.

The agreement also split Ireland in two, along a newly created border. Parts of Ulster (where the majority of people were Unionists) remained part of the UK, with its own self government.

This created the province of Northern Ireland which was separate from the Free State.

However, not everyone in the Dáil was happy with these new agreements, and another war broke out in Ireland - this time a civil war with members of Sinn Féin and the IRA divided between those who supported the Anglo-Irish Treaty and those against it. 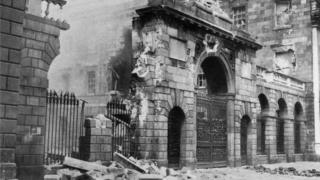 The Irish Civil War lasted from 1922 to 1923, being eventually won by the Free State forces who were backed by the British Government.

But the country didn't officially become a republic until 1949 - when the Republic of Ireland as it stands today was established.

The Republic of Ireland Act effectively ended Ireland's status as a British dominion, abolishing any remaining functions of the King in relation to Ireland, and ending Ireland's membership of the British Commonwealth.

How different is Ireland to the UK today? 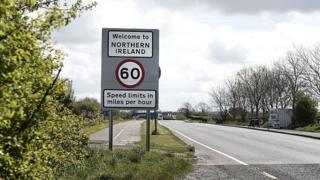 Travel: People living in the Ireland and the UK can travel freely between the two countries, without needing a passport.

Education: Primary and Secondary schools in Ireland are very similar to those around the UK. Irish is taught in all state schools, and there are also some schools were all lessons are in Irish, and English is taught as a second language, as is also the case in some parts of Northern Ireland.

The Irish equivalent to GCSEs and A Levels, is the Junior Certificate and Leaving Certificate. 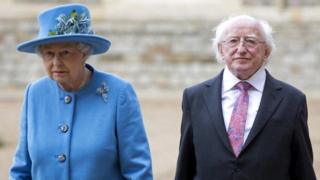 Government: The prime minister of Ireland is head of the Dáil and is called the Taoiseach. Instead of a King or Queen, Ireland votes in a President to be the country's head of state.

Healthcare: While the UK has the National Health Service to provide medical care, the system in the Republic of Ireland is a bit different.

In Ireland the government provides medical treatment for free or at a reduced cost for people on low incomes. Others who are not entitled to a medical card must pay fees for certain health care services. 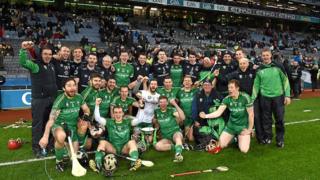 Getty Images
The Irish sport hurling and Scottish sport shinty are similar, and so the two teams can play each other with modified match rules

Sport: Gaelic football and hurling are the two most popular sports in Ireland, but they aren't widely played in the UK.

The Republic of Ireland has it's own national football team, while in rugby and cricket the Ireland national team represents both Northern Ireland and the Republic.

Money: The Republic of Ireland joined the Eurozone in 2002.

The history of Northern Ireland