It's been caused by a large sandstorm which has been whipped up by dry and windy conditions. Although it looks cool, the storm could cause problems to people's health and people living in the area have been told to be careful outdoors. 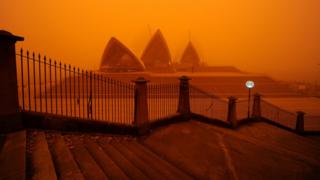 Children with lung conditions such as asthma have been told to stay inside if possible.

The impact of the dust was obvious across iconic locations like the Sydney Opera House, Sydney Harbour Bridge and Bondi Beach. 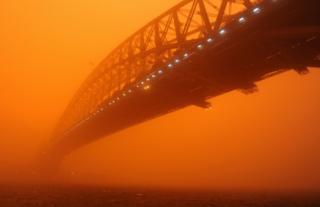 The dust storm stretched for more than 300 miles and the air quality in the Australian state of New South Wales has dropped to 'very poor'.

Sydney's east and central coast both recorded the worst air quality for the state as the city was engulfed in dust.

What it's like to live in drought in Australia