Insects are on the menu at a restaurant in New York City.

Brooklyn Bugs chef Joseph Yoon says his biggest challenge was turning something that 'people don't think of as food into something delicious'.

Bugs are easier to farm than cows and sheep, taking up less land and using less water. That makes insects more environmentally friendly to eat.

And, this isn't as unusual as it might sound ... recently a major UK supermarket started selling packets of edible bugs too.

Sainsbury's says it is the first British supermarket to stock packets of Eat Grub's smoky BBQ crunchy roasted crickets, which will be sold in 250 stores across the country.

While it might sound strange to us, around the world eating bugs isn't that weird, More than two billion people already eat them, and scientists say eating bugs could be the key to saving our environment.

They believe insects could help fight world hunger and malnutrition because there are so many of them, they are healthy, and have less of a carbon footprint.

Why are insects so good for us?

But remember not all bugs and insects are edible! You should always check before you bite! 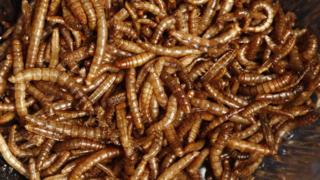 Here are 4 reasons why we should eat insects:

Insects are filled with lots of good nutrients, including amino acids and protein. Crickets, grasshoppers, and mealworms contain more copper, zinc, magnesium and calcium than beef!

Agriculture produces a lot of greenhouse gases and farming insects doesn't require as much land and water as traditional agriculture does. Insect farming is already happening in Africa.

Insects provide an opportunity for new ideas in business and the technology and scale of edible insect farming is improving. Insects can be eaten raw or processed into powders. Several new businesses in the Netherlands, South Africa and Kenya have been set up to focus on making insects for human food.