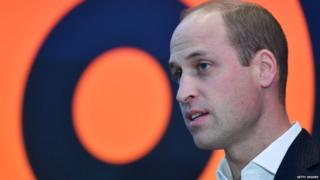 The Duke of Cambridge has accused social media companies of not being good enough when dealing with issues such as fake news and cyber-bullying.

The prince praised the way they had helped bring people together, but said they also had a great deal to learn about being responsible.

His Cyberbullying Taskforce has worked with the BBC to develop a new internet safety app for children called Own It, which is launching next year.

More from BBC Own It

Why are there lots of bad things online?

Online trolls hiding behind a keyboard

Do you think adults should set a better example?

Cyberbullying can seriously harm the mental health of children and young people. The effect of technology means the impact of bullying becomes much larger through social networks, and can feel harder for young people to escape.

Studies suggest that some 35% of 11-17 year olds have experienced some form of cyberbullying during their lives, and 40% have witnessed cyberbullying online.

In response to this issue, the prince launched a taskforce in 2016 to raise awareness and offer practical support for children and young people suffering cyberbullying.

Our technology companies still have a great deal to learn about the responsibilities that come with their significant power.

The Cyberbullying Taskforce is developing a resource to provide practical support, advice and information for those affected by cyberbullying.

If you want more information about anti-bullying then click here for more advice from BBC Own It.

Your tips for being kind