World Toilet Day 2019: Why are toilets so important? 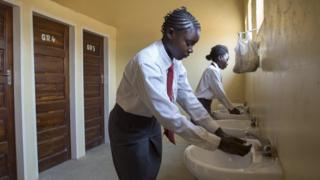 When you think of toilets what comes to mind? Poo? Wee? Smelliness? Does the whole subject of toilets make you laugh? Well, take a second to imagine what life would be like without safe access to a toilet.

For 4.2 billion people around the globe, that is a reality. That's more than half the global population.

Today is World Toilet Day. It's an awareness day organised by the United Nations - a worldwide organisation, that brings countries together to talk about, and try to agree on, world issues.

The United Nations has set a goal of making sure everyone in the world has a safe toilet by 2030.

Did you know you'll spend roughly three months of your life on the toilet? There's 45 MILLION of them in UK homes.

But, according to the charity, Wateraid, 344 million children in Sub-Saharan Africa don't have a clean toilet at home.

There are also 620 million children in the world who do not have access to school toilets.

Not being able to get to a clean toilet easily leaves a lot of children at risk of serious illness.

It forces them to either use dirty, unsafe pits, go in the open, or simply stay at home and miss out on their education.

The United Nations is calling on the all the big governments in the world to take a stand and help fund safe toilets for all.

They want to meet a target of safe toilets for everyone by 2030.

In the meantime, there are lots of charities trying to speed up the process. For example, Toilet Twinning. They work with schools, raising money to help fund toilet building in the most deprived areas in the world.

The changes are making a difference. In Bangladesh, for example, the number of people without access to a safe toilet has fallen from 42% in 2003 to less than 1% now.

The problem of building enough toilets in India

Event showcases the toilets that could save lives