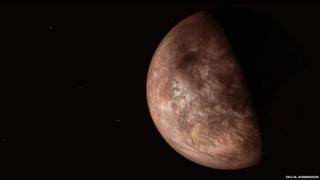 ESO/M. KORNMESSER
Artist impression of the planet Barnard's Star b, which is thought to be quite cold.

Meet Barnard's Star b. It's a newly discovered planet that is 3.2 times bigger than Earth, has a surface temperature of around -170 Celsius and a year of 233 days.

Just six light-years away, it's also one of the closest exoplanets ever found.

Scientists are excited to start studying the planet and hope they'll find out more about how worlds are formed and the potential for life on other planets.

Check out these amazing space discoveries

Have scientists found the first exomoon? 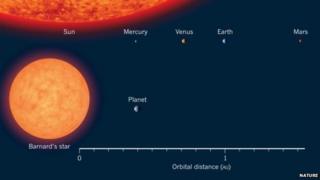 Even though this star is close to us, spotting planets is not easy! Astronomers have been hunting for planets near Barnard's Star for decades.

They used a special method to search the skies called the radical velocity technique. This looks for 'wobbles' in a star caused by the pull of an orbiting planet.

This is the very first time this method has been used to discover a planet this small so far away from its star. Pretty cool!

The Next Generation of Telescopes 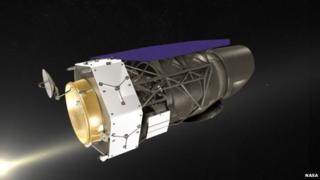 NASA
The next generation telescope WFirst, should have the capability to produce a direct image of the new planet

Scientists are keen to begin further studies on Barnard's Star b and hope that NASA's new telescope called the Wide Field Infrared Survey Telescope (WFIRST) can provide even more details about the planet's properties.

The WFirst telescope's mission is to detect exoplanets and research dark energy. It will search for gases like oxygen and methane in the planet's atmosphere, which could point to potential signs of life.

This super powerful telescope is still being built, so we'll need to wait a while yet. Watch this space!

Leonid Meteor Shower: How can you see it?

Could there be life on newly discovered planet?