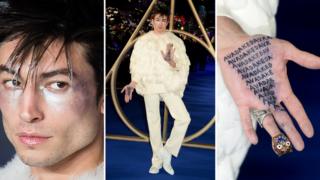 Ezra Miller hits the red, or should we say blue, carpet again with another amazing outfit.

Dressed in what many would describe as a fabulously fluffy owl, he wowed onlookers at the London premiere of Fantastic Beasts: Crimes of Grindelwald.

This outfit follows on from his 'sassy sleeping bag' look at the film's world premiere in Paris earlier last week.

With silver make up and a tiny owl on his finger, eagle-eyed Harry Potter fans will have spotted the words of the famous 'killer's curse' on his hands - Avada Kerdavra!

What do you think of Ezra's look? Do you prefer the sassy sleeping bag or the fluffy owl?

Make sure to vote below! 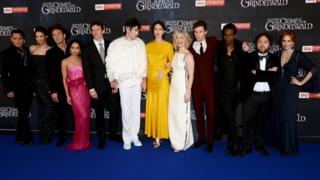 Getty Images
Ezra Miller joined his cast mates who appeared to have dressed down for the occasion? Did no one fancy going as a cat? 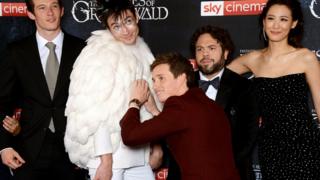 Getty Images
Eddie Redmayne, who plays Newt Scamander, appeared to be a fan of Ezra's look. Perhaps he's trying to hide inside the feathers here? You're too big, Eddie!

Fantastic Beasts: Meet the man who makes wands for the stars