Freakshake milkshake: Action on Sugar say they're bad for Children

A high-calorie, mega milkshake known as a "freakshake" is proving popular among children, but health campaigners are concerned they're too unhealthy.

The milky creations first invented in Australia, combine ice cream, chocolate bars and entire slices of cake. Sounds tasty, but they include sugar, lots of sugar. 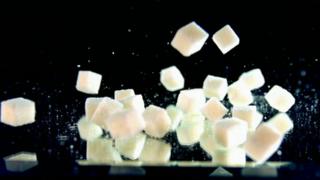 Some freakshakes contain 39 cubes of sugar.

It's over six times the amount of sugar recommended for seven to 10-year-olds.

It is the equivalent of drinking more than four cans of cola and would also mean hours of running around to burn off all those calories. 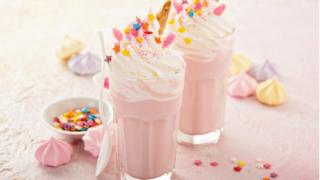 Toby Carvery had two freakshakes in the top 10 of the survey, as did the Harvester restaurant.

Action on Sugar also looked at supermarket milkshakes and found that 90% of the 41 products surveyed would receive a red/high label for excessive levels of sugars.

The top three for sugars and calories were Muller Milk Frijj in chocolate, fudge brownie and cookie dough flavour.

A spokesperson for Muller said: "We know that for health conscious consumers, the choice of reduced sugar is important, without compromising on taste. That's why we introduced a Frijj zero added sugar range.

"Milk contains naturally occurring sugars in the form of lactose but we would stress that it is also a natural and nutrient rich product, containing essential nutrients such as protein, calcium and vitamins."

These very high calorie drinks, if consumed on a daily basis, would result in children becoming obese and suffering from tooth decay - that is not acceptable.

As part of the Government's plans to reduce childhood obesity, Public Health England (PHE) has a sugar reduction programme. They want businesses to cut sugar by 20% by 2020 and milkshakes are part of that.

But Graham MacGregor who is the Action on Sugar Chairman says more needs to be done.

"These very high calorie drinks, if consumed on a daily basis, would result in children becoming obese and suffering from tooth decay - that is not acceptable," he said.

"These high calorie milkshakes need to be reduced immediately below 300 calories per serving."

Sugar tax: What is it and why are we talking about it?

Energy drinks could be banned for children in England