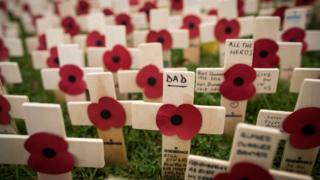 Millions of people have are gathered around the UK to remember those who died in the war on Armistice Day.

Relive what happened during the special day below. 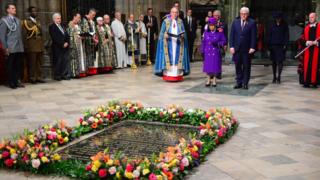 The Queen has attended a remembrance service at Westminster Abbey for those killed and wounded in conflict, as the UK marks 100 years since Armistice Day.

Her Majesty was joined at the service by Prince Charles, the Duchess of Cornwall and the dukes and duchesses of Cambridge and Sussex. 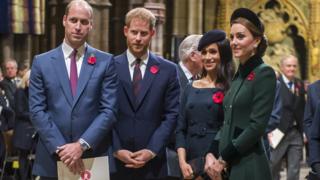 Prime Minister Theresa May and German President Frank-Walter Steinmeier - who earlier became the first German leader to lay a wreath at the Cenotaph in London - were among the 2,000-strong crowd.

The Queen laid flowers at the grave of the Unknown Warrior, whose body was brought from France in 1920. 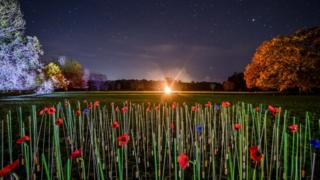 PA
A beacon lights up the sky at Barrington Court in Somerset - one of more than 1,000 lit across the UK

A beacon was lit at Westminster Abbey, followed by more than 1,000 others across the UK on Sunday evening.

The lights are intended to symbolise the end of the darkness of war and a return to the lightness of peace. 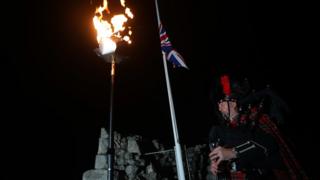 PA
David Danks, of the City of Leeds pipe band, plays as a flame burns at Conisbrough Castle in South Yorkshire
2:30pm - More events still to come this evening 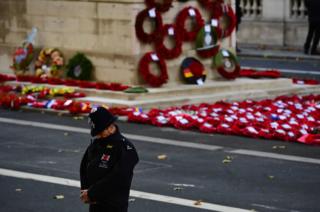 PA
A police officer bows his head during the remembrance service

Services of remembrance are also being held at Llandaff Cathedral in Cardiff, Glasgow Cathedral, St Anne's Cathedral in Belfast and Westminster Abbey in London.

At 7:00pm, starting at Westminster Abbey, more than 1,000 beacons will be lit across the UK.

2:15pm - Martin reports on Remembrance Day events from London
1:45pm - A look back at the morning's events

Thousands of marchers continue to walk past the Cenotaph memorial in London.

It was described by organisers as a "nation's thank you" to all those who fought in WW1, and featured descendants of veterans from across the country. 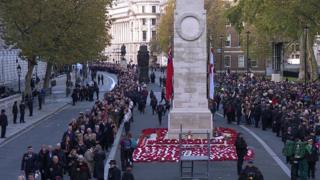 Ten thousand people are marching past the Cenotaph in London

A procession of 10,000 people to the Cenotaph memorial in London is taking place this afternoon to honour those who died in WW1.

The so-called People's Procession has not taken place before, and 10,000 members of the public have been selected at random to take part.

The procession itself will take around 30 minutes and will start at Green Park, before heading past the Cenotaph and finishing at St James' Park.

They will march together to pay their respects and help express the nations thanks to the generation that served and those that never returned.

12:40am - Nations unite in remembrance

Thousands of people in communities across the UK observed a two-minute silence at 11:00am in recognition of the centenary of the Armistice at ceremonies, parades and services.

In Scotland, first minister Nicola Sturgeon laid a wreath at the Stone of Remembrance outside the city chambers in Edinburgh after 11 rounds were fired from the castle. 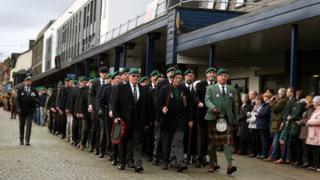 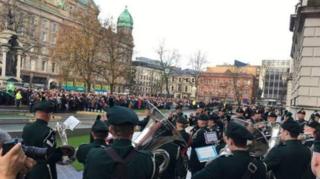 And in Wales, first minister Carwyn Jones took part in a ceremony at Cardiff's war memorial ahead of a service with Prince Edward and the Countess of Wessex, at Llandaff Cathedral, Cardiff. 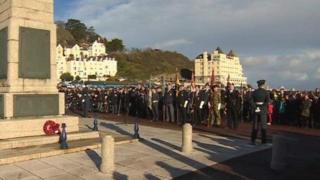 Crowds pay their respects at Llandudno in Wales 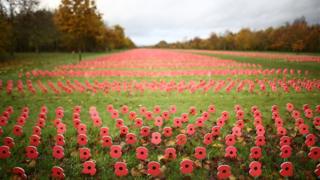 PA
Poppies fill the Centenary Field of Thanks at the National Memorial Arboretum in Staffordshire, England
12:15am - People around the world remember WW1

Elsewhere around the world commemorations are taking place to mark what was meant to be the war to end all wars. 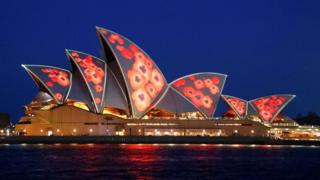 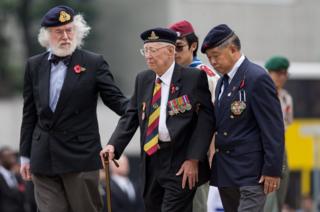 EPA
Veterans make their way from the cenotaph in Hong Kong, China, having laid their wreaths 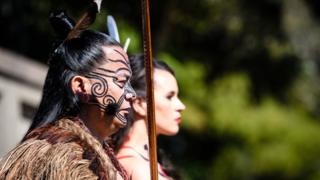 EPA
Paper poppies fell from a plane over Adelaide, Australia 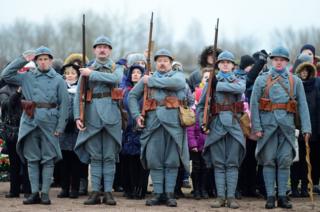 AFP
Members of military history clubs wear WW1 French military uniform during a ceremony at the Brotherly cemetery of WW1 heroes in Tsarskoye Selo outside Saint Petersburg, Russia
11:55am - How you are marking the end of the WW1

Many events are taking place across the UK and abroad to mark the significance of the centenary of the end of World War One.

You've been telling us what you and your school have been doing to remember those who lost their lives in the war. 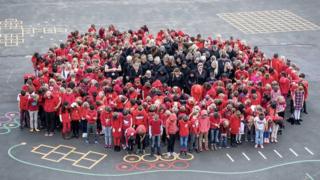 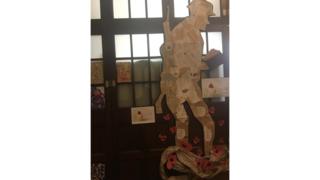 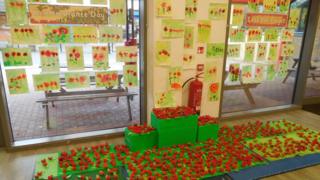 If you want to see more pictures of how you are marking the centenary of World War One then click here.

Have you ever wondered if any of your relatives fought in World War One?

Eleven-year-old Dafydd from Cardiff, Wales, wanted to know more about his family's role in WW1.

It's because he'll be joining 10,000 people for a special procession in London on Remembrance Sunday in honour of all those who died in the conflict.

11:12am - Royals pay tribute at the Cenotaph 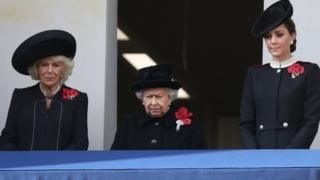 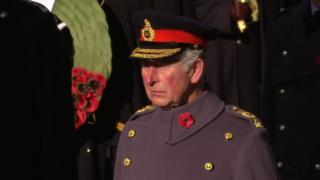 Prince Charles leads the ceremony on behalf of the Queen 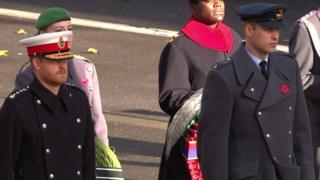 The Duke of Sussex and Duke of Cambridge were in attendance to pay their respects
11:07am - Leaders lay wreaths at the Cenotaph 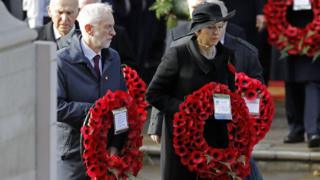 Getty Images
Jeremy Corbyn and Theresa May both laid wreaths

Prime Minister Theresa May and Labour Party leader Jeremy Corbyn are among those who paid their respects at the Cenotaph during the two-minute silence.

The Prince of Wales is now leading the nation's tributes to all those who have lost their lives in conflict on the centenary of the Armistice today.

The UK observes a two-minute silence to mark 100 years since the end of World War One and to remember those who fought and died.

It takes place on the 11th hour of the 11th day of the 11th month to reflect the time and date the guns fell silent in 1918, ending World War One.

In London, the King's Troop will mark the silence by firing guns from Horse Guards Parade and Big Ben will sound 11 times at the beginning of the silence.

Wreaths will then be laid by members of the Royal family and politicians at the Cenotaph in London, where the People's Procession will march this afternoon.

10:30am - Armistice Day events held around the world 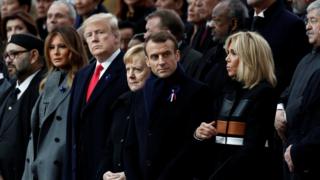 World leaders are attending an international ceremony in Paris, France, marking the centenary of the Armistice that ended World War One.

US President Donald Trump and Russian President Vladimir Putin are among those gathered for a service beneath the famous Arc de Triomphe.

French President Emmanuel Macron and other officials marched to the arch in the rain, under black umbrellas, while church bells tolled through the city. 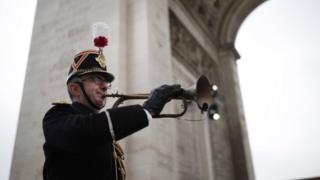 Many other events have been taking place around the world.

Armistice Day falls each year on 11 November to mark the day in 1918 when the fighting in World War One was stopped.

The Allies and Germany signed an armistice in a railway carriage in the Forest of Compiegne in France at 5:00am. Six hours later, at 11:00am, the conflict stopped.

Britain's King George V announced that a two-minute silence would be held in 1919, four days before the first anniversary of Armistice Day.

The silence continues to be observed every year on the 11th hour of the 11th day of the 11th month.

Communities are gathering on dozens of beaches across the UK this morning to witness film director Danny Boyle's project, titled Pages of the Sea, which marks the centenary of the end of World War One.

A large-scale portrait of a casualty from the war has been drawn into the sand at low tide.

The locations include Folkestone, Clacton-on-Sea, Blackpool, Lyme Regis and Redcar.

At Folkestone beach, a large, 60-metre portrait of Wilfred Owen, the second lieutenant who would become known as one of England's greatest war poets, has been created.

The Queen and senior royals will attend London's Cenotaph for the national remembrance service at 11am.

It will be followed by a procession of 10,000 members of the public.

Services will also take place across the UK - with around 1,000 beacons being lit.

The day's events started at 6am with pipers across Britain playing the Scottish lament Battle's O'er.

How are you marking the end of the WW1?

How did WW1 come to an end?