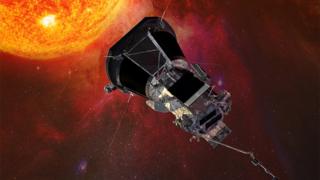 Nasa's special Parker probe has got closer to the Sun than any spacecraft in history.

But just how close is it? Well, it's now within 15 million miles of the surface of the star.

That might seem like quite a long way from the surface, but in space exploration, that's a huge deal.

The spacecraft will face brutal heat and radiation conditions while providing experts with the closest ever observations of the star.

To keep working and not burn up, Parker must always keep its heat shield pointed at the Sun.

Nasa have put the Hulk, Doctor Who and Godzilla in space!

Less than three months after lift-off, Parker's speed hit 213,000 miles per hour as it entered the outer atmosphere of the Sun.

That is seriously fast - about 900 times faster than the top speed ever recorded by a Formula One car.

So, you won't be surprised to learn that Parker is the fastest spacecraft of all-time! 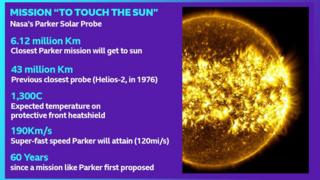 It blasted past the long-standing speed record set by a German space mission in 1976.

Nasa is also expecting Parker to go even faster during this mission - achieving a top speed of about 430,000 miles per hour.

However, going into the solar atmosphere means a nervous time for the scientists at Nasa.

They won't be able to contact with the probe until it is far enough from the Sun to avoid any radio interference. 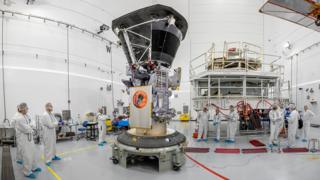 If it survives this trip to the Sun, then Parker's adventures are far from over.

Nasa has has even bigger plans - 23 trip over the next seven years. which should go even closer to the surface and break even more records.

The next one is expected to happen in April.

Nasa at 60: Where did Nasa come from?