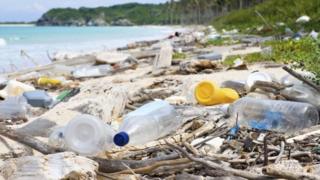 Each year, Collins Dictionary compiles a shortlist of new and notable words that reflect the last 12 months.

They have named 'single-use' as the word of 2018. This refers to products, often plastic, which are made to be used only once before they are thrown away. The word has seen a four-fold increase since 2013.

Other words that Collins said were on the increase are:

Vegan: A person who refrains from using any animal product whatever for food, clothing, or any other purpose.

Floss: (we think you know this one) A dance in which people twist their hips in one direction while swinging their arms in the opposite direction with the fists closed.

Plogging: A recreational activity, originating in Sweden, that combines jogging with picking up litter.

Whitewash: To cast a white actor in the role of a character from a minority ethnic group.

Gammon: Some people say this one is a bit rude! Collins define it as a person, typically male, middle-aged, and white; especially one who supports the withdrawal of Britain from the European Union.

Do you agree that these are words of the year? Which one is your favourite? Which word are you using more and more let us know!

13 fancy words to use to boggle people's minds

Umm, like literally, these are the most annoying filler words, you know?