It was Fright Night this week on the X Factor in more ways than one!

On Saturday, issues with the audio started during Danny Tetley's performance and continued through Anthony Russell's song.

Because of this, the show cancelled voting on the Saturday night and moved it to the Sunday instead.

On Sunday, United Vibe were sent home after the public vote revealed they were unimpressed with their performance of 'Bleeding Love'. 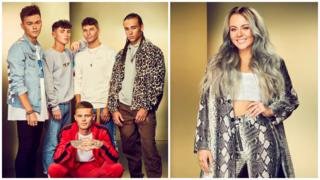 ITV
United Vibe and Molly Scott were both eliminated during the X Factor's Halloween weekend.

The second act to go was Molly Scott - the judges voted three to one to send her home.

This was after a sing-off with Robbie's second group, Acacia & Aaliyah.

All the judges made it clear that it was a tough choice to make between the two, with Simon Cowell saying, "I can't believe either of you are in the bottom two."

What did you think about Molly and United Vibe's elimination?

Did you think the right acts left?