Ross Edgley has just become the first person to swim the whole way around Great Britain!

That's 1,780 miles of swimming, the equivalent of swimming the distance from Manchester to London 11 times over!

He left Margate, Kent on Friday 1st June and arrived in Margate again on Sunday 4th November at 9am.

During the 157 days he was swimming, he did not set foot on dry land and would swim on average twelve hours a day!

What should Ross do next? Let us know in the comments! 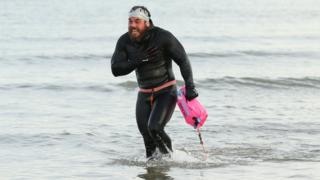 During his journey he encountered all sorts of difficulties, including cold water, tides, storms and jellyfish!

When he finally returned to shore at 9am on Sunday, he was greeted by hundreds of well-wishers.

He said, "There's not many places you come in and people are asking you to sign bananas."

Ross has already broken a world record - he climbed a rope the length of Mount Everest in 19 hours.

He has also run a marathon while pulling a car and attempted to swim 24.8 miles between two Caribbean islands while carrying a tree weighing 45kg.

That's the equivalent of him carrying two seven-year olds!

We wonder what Ross will try next? Maybe you have some suggestions for him?