The Simpsons: Should Apu be written out of the Simpsons? 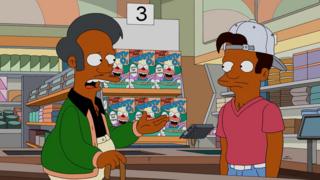 Getty Images
Will Apu be written out of the Simpsons?

He runs the Kwik-E-Mart, is a doctor in computer science and is vegan - but most notably Apu Nahasapeemapetilon is currently at the centre of a huge debate.

Apu is a popular character that has featured for over 28 years in the long-running television show, The Simpsons.

But recently there has been a growing concern over the way he is portrayed in the show and whether his character is a problem, with some people saying he is a stereotype.

The response to his character has meant that the producers of The Simpsons are considering whether they should write him out of the show.

Do you think Apu should be written out of The Simpsons?

Let us know your thoughts in the comments.

Stereotype - it's a weird word, but an important one to understand.

Here are some examples of stereotypes that you might recognise:

Stereotypes are ideas about someone or a group of people based on things like their age, their gender, their accent, the colour of their skin, where they live or even disabilities.

These views are often incorrect and unfair because they are not based on fact, and are instead generalisations.

Why is Apu's character being called a stereotype? 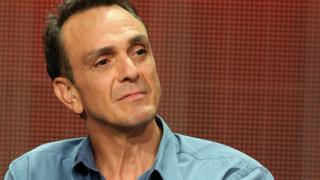 The character of Apu has stereotypical characteristics that many find offensive towards people from South Asia and Asian Americans.

His accent in particular has been criticised, with some saying that it is exaggerated - made to sound silly or over-the-top.

He is also voiced by a white actor, Hank Azaria, which commentators say is why this accent is so offensive.

In the past, Hank has spoken about the voice he was asked to do for Apu, saying that he challenged producers who asked him to do what he thought was a stereotypical accent.

It's not tremendously accurate. It's a little… stereotyped.

However, fans of the show and the character argue that The Simpsons are full of characters with other stereotypes, such as the Scottish school groundskeeper Willie.

They argue that stereotypes are part of the humour of the show.

One of the show's producers, Al Jean, commented on the issue surrounding Apu, saying "we don't want to be totally politically correct. That has never been us. It's given us a lot of thought." 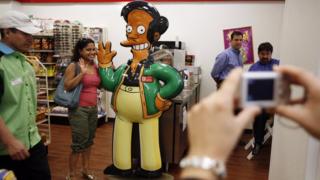 But critics say that Apu stands out because there have been so few South Asian characters on television until very recently.

They say his characterisation has contributed to lots of false ideas about what people from South Asia and what Asian Americans are like.

Pakistani-American singer Shuja Haider speaking to The Guardian newspaper said: "It wasn't just seeing him on screen - it was being called Apu in locker rooms, being mistaken for the clerk in convenience stores, hearing people mock my family's accents by saying, "Thank you, come again!""

It's hard to say.

Some reports suggest that the character will be leaving the show.

Adi Shankar, a Netflix producer, has claimed that The Simpsons are writing out Apu from the show.

In response, Simpsons producer Al Jean has said on Twitter that "[Adi] does not speak for the show."