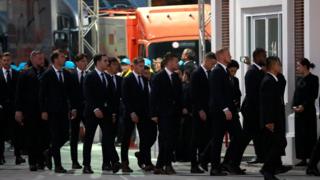 Reuters
Leicester City players arrive for the funeral in Bangkok

Leicester City players have arrived in Thailand for the funeral of the club's owner, Vichai Srivaddhanaprabha.

The Leicester players travelled to Thailand on the 12-hour flight on Saturday after winning 1-0 at Cardiff City in the Premier League, in the first game since his death.

They will arrive back in the UK on Tuesday to prepare for their match against Burnley on Saturday. 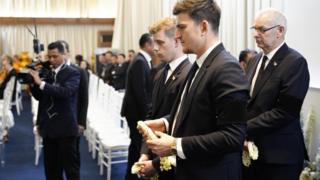 A minute's silence was held before all Premier League games this weekend, and the players wore black armbands.

The team were due to play Southampton in the Carabao Cup on Tuesday - three days after the crash - but the match has been rescheduled to 27 November.

Vichai Srivaddhanaprabha was killed in a helicopter crash outside the football club's ground on Saturday 27 October.

Five other people were also killed in the crash - two members of Mr Vichai's staff, the pilot, and a passenger.

Following the game against Cardiff on Saturday afternoon some players and staff travelled to Thailand for Mr Vichai's funeral.

Leicester announced on Friday that supporters travelling to Cardiff would be offered a free breakfast at King Power Stadium before leaving to travel to South Wales.

Fans were also be given a free t-shirt once they arrived at Cardiff City stadium, honouring the chairman.

Leicester striker Jamie Vardy told Sky Sports the team wanted to play and get a positive result, because "it's what Vichai would have wanted".

He said: "It's been the hardest week of everyone's lives.

"He wasn't just a chairman, he literally was part of your extended family." 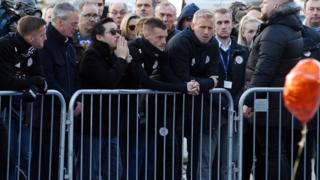 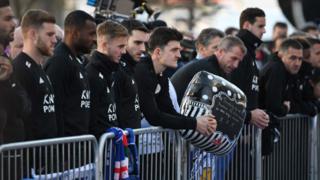 AFP/Getty
Other members of the first team joined the sombre crowds outside the ground
What happened?

Leicester had drawn 1-1 against West Ham United at the King Power Stadium on Saturday.

About an hour after the game finished the helicopter took off from the pitch.

Thousands of bouquets and scarves have been left outside the King Power Stadium in tribute to the victims.

People took to social media to share their thoughts after the crash happened. 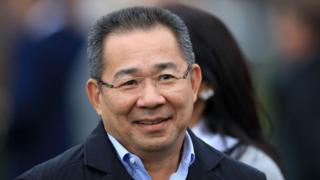 Leicester player Jamie Vardy paid tribute to his club's owner: "Struggling to find the right words....but to me you are legend, an incredible man who had the biggest heart, the soul of Leicester City Football Club. Thank you for everything you did…"

The club described Mr Vichai as "a man of kindness, of generosity and a man whose life was defined by the love he devoted to his family and those he so successfully led".

The Duke of Cambridge said he was lucky to have known Mr Vichai, describing him as a dedicated family man.

A book of condolence has opened at the King Power Stadium, with an online version on its website for those unable to visit in person.

The team's next fixture against Southampton in the EFL Cup, scheduled for Tuesday evening, has been postponed. The players will also wear black armbands this week against Cardiff in the Premier League.

The Air Accidents Investigation Branch said inspectors would be at the crash site until the end of week before transporting the wreckage to specialist facilities in Farnborough.

"In the meantime, we are still gathering evidence as part of our investigation," a spokesman said.

Footballers' black armbands: Why do players wear them?