How did WW1 come to an end?

World War One was the first war that truly affected the whole world.

It was fought on battlefields across the world between the Triple Entente - that's Great Britain, France and Russia - and a group of countries made up of Germany, Austria-Hungary and other powers like Bulgaria and the Ottoman Empire.

As the War continued, other countries joined in on both sides, and the fighting didn't just take place in the trenches in Europe, but also Africa, the Middle East and Asia.

It became known as The Great War because it affected people all over the world and was the biggest war anyone had ever known.

New weapons and technologies were used that enabled new ways of fighting, which caused destruction on a scale that had never been seen before.

Millions of people - both soldiers and ordinary citizens - lost their lives as a result of the fighting. 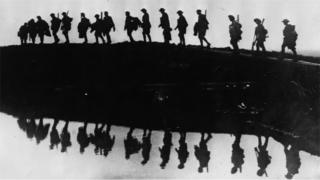 This year, we remember 100 years since this happened.

How did WWI come to an end?

In April 1917, the US declared war on Germany. American troops went into action just over a year later on the side of the Triple Entente.

Germany and its allies knew that they had to launch a big offensive if they were to win the war before too many US troops arrived, as they were a very powerful nation. Not only that, but the American soldiers weren't tired from years of fighting, like everyone else was.

The German soldiers attempted to push Britain and its allies back with a series of offensives, or attacks.

But on 8 August 1918, the French and British armies launched the Hundred Days Offensive - a counter-attack, which pushed the Germans back. 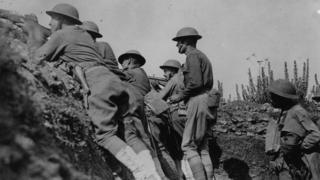 Getty Images
This picture shows US soldiers, who had joined the fighting towards the end of World War One on the side of the Triple Entente

By the end of August, there were over 1.4 million American troops in France, and Germany and its allies were completely overwhelmed.

Not only that, but German citizens back home were suffering from food shortages and illness, and started to rebel. There were strikes and demonstrations in the capital of Berlin.

By the autumn of 1918, Germany and its allies realised it was no longer possible to win the war. Those fighting alongside Germany started to withdraw from the war and - by the start of November - Germany was fighting alone.

They could not win. The leaders of the German army told the German government to end the fighting.

The government asked the US for an armistice - an agreement to stop the fighting - and Germany's leader, Kaiser Wilhelm, left his job on 9 November 1918. 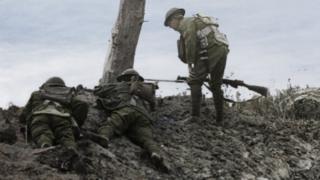 Print Collector
This photo, which has had colour added to it, shows soldiers fighting in the trenches in World War One

Two days later, Germany signed the Armistice and the guns fell silent. The fighting stopped at 11am on the eleventh day of the eleventh month.

What happened when the war ended?

Across the UK, there were huge parties in the streets as Big Ben, which had been silenced during the war, rang out once more.

But despite the celebrations, there was deep sadness.

No conflict before World War One had been so devastating - most families in the UK had lost someone they loved.

Millions of soldiers and ordinary citizens had lost their lives, and many more came home affected by injuries or mental trauma. 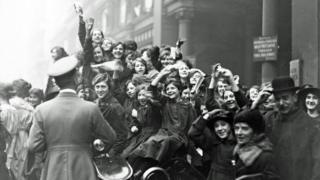 Getty Images
These crowds in London are celebrating the end of World War One
Why was there another World War?

After the war, Britain, France and the US wanted to ensure that there was peace for a long time. They met up to decide how they could do this, but Germany, Austria and Hungary were not invited.

Once they had made up their minds, they invited the other countries' leaders to meet them in Versailles in France, where they were presented with an agreement called the Treaty of Versailles.

Germany was shocked by how strict the treaty was. For example, it said that it had to accept total blame for starting the war.

It also demanded huge costs in repayments, called reparations, to be used to help rebuild civilian areas after the devastation.

But many experts now say that these costs were far higher than Germany could ever pay. Not meeting these payments caused many people lots of problems in the following years.

It has also been argued that the results of the penalties put on Germany in this treaty contributed to the causes of World War Two.

How football paused WW1 at Christmas