Thousands of women, men and children from countries in Central America are attempting to cross the Mexico-US border without permission.

They have travelled there in a large group, also known as a caravan, that has grown in size as it made its way through Honduras, Guatemala and Mexico over several weeks.

US President Donald Trump has repeatedly warned the migrants to turn back.

Where are the migrants now? 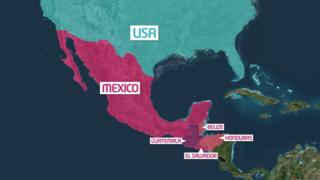 Now, more than 7,000 migrants have reached the border and it's expected that number could rise to 10,000.

Many of them are staying in temporary camps in the Mexican cities of Tijuana and Mexicali, near the US border.

The mayor of Tijuana says his city is struggling to cope with all the migrants arriving, calling the situation a humanitarian crisis.

Who are the migrants and why did they leave their homes?

The people in this group do not come from any one place - they come from lots of different countries.

They have left their homes for many different reasons, but it is believed that some reasons could be violence and poverty in the countries where they live, and the hope of a better life elsewhere.

Despite not having permission to live there, they say they plan to cross through Mexico and into the US.

An 'asylum seeker' is a person who has applied to be let into a country because they say they're facing harassment due to their race, religion, nationality, political belief or membership of a particular social group.

Lots of them say they have given up attempting to apply to live and work in the US by following the law, because the process takes too long.

Many of the travellers say that travelling together in such a large group is a way to keep safe.

How is the US reacting?

For many Americans, immigration is a really important issue.

Stopping illegal immigration was one of the main promises Mr Trump made when he was elected US president.

He has promised to build a wall on America's southern border. 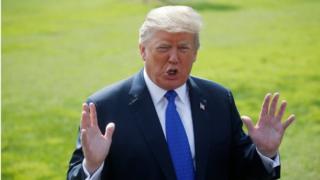 He has called the situation a "national emergency" and has sent army troops to protect the border.

On Sunday 25 November, a peaceful march in Tijuana got out of control after hundreds of people tried to run across the border into the US.

American authorities used a weapon called tear gas to keep them away. 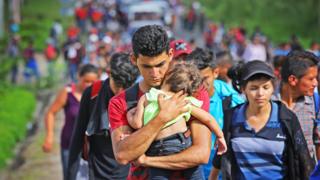 Getty Images
The large group have been gathering numbers as they travel across Central America. They are hoping to gain access to the US to live and work, but President Trump is unhappy that so many people are attempting cross the US-Mexico border illegally

Later Mr Trump defended the use of tear gas on the crowd, which included children.

He said: "Here's the bottom line - nobody's coming into our country unless they come in legally."

He added that the gas used was "very safe".

But journalists who were there said the tear gas was painful even from a distance away.

The truth is we don't know. Many people are still travelling to the border.

Mexican authorities say they will listen to requests for asylum from the travellers but if anyone refuses, or takes part in violence, the government says they will force them to leave.

Some countries are sending buses to transport those who may have changed their minds back to their homes.

President Trump has threatened to completely close the border if migrants continue to try to cross it illegally.

Why is the US separating migrant children from their families?

Trump to 'keep families together'