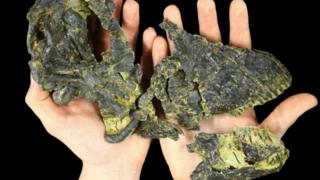 The first baby diplodocus skull ever found is helping to explain how dinosaurs that hatched from grapefruit sized eggs went on to grow into some of the largest animals that have ever walked the Earth.

Diplodocuses belonged to a group of huge, long-necked, plant-eating dinosaurs that walked on four legs and were known as sauropods.

The fossil of the baby which has been nicknamed Andrew, was uncovered in America. The baby's skull is just 24 centimetres long and about the size of a pineapple without the leaves. Researchers estimate Andrew was just two to four years old when he died 150 million years ago, during the late Jurassic period.

Despite his young age, Andrew was probably already six metres long - about the length of a small van. 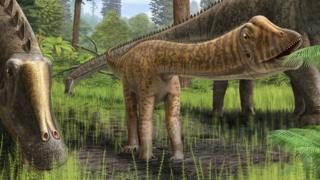 Cary Woodruff who did the study into the rare skull says:

"You consider that you start your life coming out an egg the size of a melon. And when you die, you're a hundred feet long. That's quite a number of growth spurts you have to go through."

By studying the skull, Woodruff thinks he has some new clues about how diplodocuses grew so fast.

The Big Question: What was the first dinosaur?

Did dinosaurs come from the UK?

Can we bring dinosaurs back?

While fully grown diplodocuses have peg-like teeth at the front of their mouth and a wide muzzle designed for eating leaves from trees, Andrew had a much narrower mouth with sharper teeth at the front with spoon-shaped teeth designed to handle tougher foods at the back.

"Andrew had to grow up really fast, he had to eat a lot of food" says Woodruff noting that diplodocuses reached full size in about 25 years. With these different teeth, Andrew could basically pick, choose and eat as much as he needed to.

Although palaeontologist Woodruff says a narrower muzzle indicated that baby diplodocuses may have been pickier eater than mum and dad.