Skull-shaped asteroid will fly past earth after Halloween 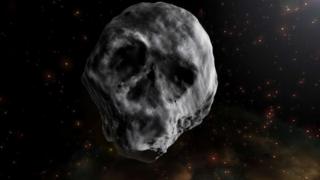 A skull-shaped space rock will zoom past Earth, but it will be too late for Halloween.

The ghoulish-looking asteroid was first spotted at Halloween in 2015. But this year, the rock will fly by on 11 November, 25 million miles away from Earth.

When the space rock first flew past our planet, it travelled at a much closer distance of 300,000 miles.

The Moon orbits Earth at an average distance of 239,000 miles. 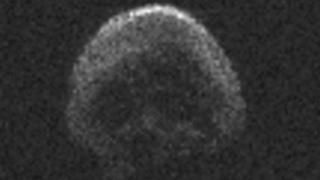 This time the rock, known as both 2015 TB145 or the 'Halloween Asteroid', is much further away meaning there's no danger of it entering the Earth's atmosphere.

With a diameter of just 2,000 feet, the asteroid is also too small and too far away to be seen with the naked eye.

The space rock is thought to be an extinct comet, stripped of its icy bits by repeated close encounters with the hot sun.

The next close approach to Earth won't be until 2088, when the asteroid will come within 5.4 million miles of the planet.