NHS: Meet Ted and find out what the NHS means to him

The National Health Service - or NHS - is a massive organisation in Britain and, this summer, celebrated its 70th anniversary.

Young or old, big or small, anyone can access the NHS for help, advice and treatment for all sorts of things.

Figures given to the BBC show that Wednesday's are the busiest day of the week for hospital admissions.

More about the NHS

The NHS in 70 seconds

Did you know these facts about the NHS?

A brief history of the National Health Service

Last year there were 56,000 hospital admissions on the average Wednesday in England - nearly 6,000 of those being children under 15.

Ted was one of those children. When he was six years old, he underwent heart surgery at Alder Hey hospital in Liverpool.

He was in surgery for eight hours and in intensive care for a week. 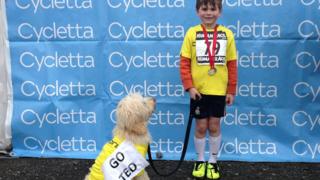 "One of the things I remember... the best toast EVER," he said.

"My advice to any kids who have to go through what I had is bring your favourite teddy, washed and cleaned... and don't worry about, it's all going to be fine. They're the best people in the world."

Ted was inspired to give something back to the staff at Alder Hey for all they had done, and decided to raise money to help other children like him. Within a few weeks, he was already competing in a sponsored triathlon - and the fundraising didn't stop there.

Ted was recognised for his work with a Pride of Britain fundraiser award for his efforts. But whilst the recognition is nice, Ted says it's not about the awards.

"Just knowing I've given money to help save people's lives is good enough for me."

NHS 70th anniversary: 7 facts you may not have known