It's been almost three months since 12 boys and their football coach were rescued from a cave in Thailand, Asia.

The group had been trapped in there for more than two weeks before they were brought to safety.

Now the Thai government says the boys are on a government-organised trip to Argentina and the United States during a break from school.

It says the 17-day trip isn't a holiday but a chance to "show the world how our kids are".

The government says the trip also provides a chance for the boys to thank the rest of the world for the international rescue effort.

The boys are all members of the Wild Boars football team. They became trapped in underground caves in Thailand, Southeast Asia, on 2 July 2018.

They went to explore the caves when it was dry, but sudden heavy rains blocked the exit, with high water making it very difficult to get out.

But rescuers managed to find their way into the network of caves and bring the boys and their coach food and other supplies.

After a lot of planning a team of more than 90 divers helped to rescue them, bringing them all out safely.

More on the Thai cave boys

What are the boys doing on this trip abroad?

They're starting off in Buenos Aires in Argentina, taking part in the 2018 Summer Youth Olympics opening ceremony.

The group were invited for sit down meal with the International Olympic Committee President Thomas Bach, who said he is "very happy" the boys will visit the Games.

The young footballers have also been given the chance to watch the games, and play a friendly match with a local youth team. 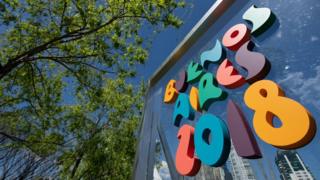 EPA
The group will visit the Youth Olympic Games, which are taking place in Buenos Aires, Argentina

After that the plan is to head to New York in the United States for a news conference at the Thai mission to the United Nations, and some guest TV appearances.

Next stop: Los Angeles. There are some more press and TV activities planned, as well as giving some of LA's Thai population the chance to meet the boys.

But hopefully it's not all work and no play. 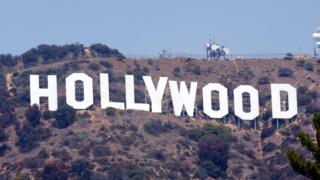 At the moment s a visit to the Universal Studios theme park is planned, before they return home.

Deputy prime minister Wissanu Krea-ngam said all expenses for the trip will be paid by the people who invited the team.

He also said the boys will be travelling during their school break, and will be well looked after.

What have the boys been doing since their rescue?

Shortly after their rescue the boys spent nine days at a Buddhist monastery practicing as junior monks.

Their 25-year-old coach received monk's orders and stayed on for an extra three months. 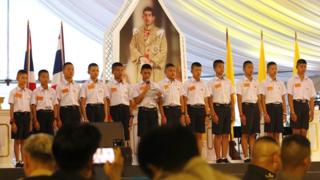 EPA
The boys attended a special event to thank their rescuers

It had been planned for them to take six months out of the spotlight, to help them readjust to normal life after the experience.

But instead they've ended up making lots of public appearances and interviews.

Last month thousands of people swarmed a well-known square in the Thai capital to try and see the boys as they attended a formal thank-you dinner attended by the prime minister. 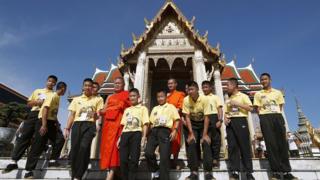 Film companies are said to be really keen to turn the story into a film.

There are also reports that the Thai government want to turn the cave site into a tourist destination, by building an on-site museum and creating a touring exhibition about the rescue.