Island duck: How did Trevor arrive in Niue? 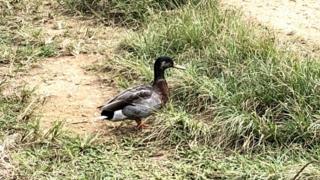 Kirk Yates
Trevor is the only duck on the Pacific island country, Niue - and the islanders can't get enough of him!

There once was a duck - a single duck - that appeared on a remote island called Niue.

Niue is an island in the Pacific Ocean, roughly 1,340 miles from Auckland, New Zealand.

The island has a population of 1,600 and hardly any land animals.

So for a duck to arrive is quite the event, and Trevor has become a bit of a celebrity!

What do you think the islanders should do to help Trevor?

This duck rescue will melt your heart!

What's the deal with Trevor? 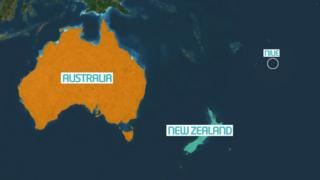 Newsround
Niue is located in the Pacific Ocean, around 1,340 miles from Auckland, New Zealand.

Trevor has been named after New Zealand politician Trevor Mallard.

He has very little water to explore on the island because there is rarely any rain.

He's found a puddle near the airport and the islanders have been keeping it topped up with water.

They often come to feed him peas, corn and rice and give him lots of attention. 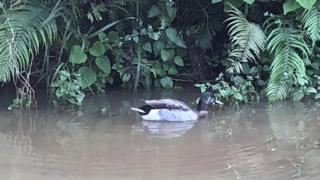 Kirk Yates
As the island has no ponds, Trevor has taken to swimming in a puddle that islanders top up with water to keep him afloat.

No one is sure where he came from or how he got to the island, seeing as it is so far from countries like Australia and New Zealand which ducks are more native to.

Some people are concerned that Trevor might get lonely and they are now considering whether to find him a friend.

One suggestion is to make a fake duck out of wood to keep him company.

Some people feel he should be flown to a country with lots of other ducks, but others want another duck to be flown out to keep him happy on the island.

For now, however, Trevor seems very content to swim around his puddle.