Astronomy: When is the best time of the year to go stargazing? 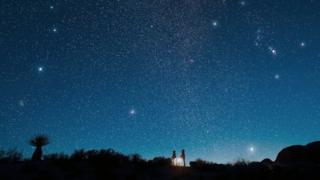 The best time to go stargazing are the days before and after each new Moon and autumn and spring are especially popular.

Light pollution makes it difficult to see things in the night sky and the Moon is the brightest thing up there.

But bright moonlight is absent from the sky the days before and after a new Moon.

What is the 'dark side' of the Moon?

Blood moon: The view around the world

A new Moon happens about 12 times a year and dates can be found by looking at a lunar calendar.

Those during autumn and spring are good for stargazing in the UK, as well as other parts of the northern hemisphere - the nights are longer than in the summer but not as chilly as they are in the winter!

There are lots of special areas in the UK which are free from a lot of light pollution and where you can get the best views of the night sky.

They are far from towns and cities to avoid light pollution, and special efforts are made to reduce any lights within the area.

Spring and autumn are also good times to catch a glimpse of other galaxies outside of our own, such as Andromeda. (Yes, really! It may be 2.5 million light years away, but you really can see it glowing in the night sky!)

Planet Earth is in the Milky Way galaxy and the summer is a good time to view other parts of our it. 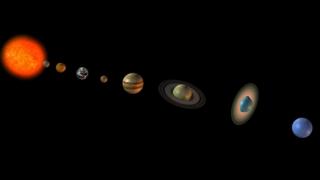 The solar system's planets have been visible a lot this year, so you're still in with a chance to see them if you go stargazing now.

Neptune and Uranus will be visible in the south-eastern sky but you'll need a telescope to find those two and it will be a struggle to get a glimpse of Venus or Mercury.

Do you enjoy stargazing? Let us know either by emailing newsroundcomments@bbc.co.uk

How the SKA telescope will explore the Universe