Scotland and England footballers make it to Women's World Cup 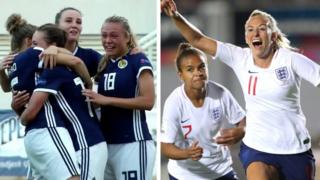 Scotland and England women's football teams have qualified for next year's World Cup.

Scotland beat Albania 2-1 on Tuesday to qualify for the tournament for the first time ever.

The Women's World Cup kicks off in June 2019 in France.

The girls fighting to play football

Wales had hoped to make it through but their loss to England, as well as other match results, meant they missed out on qualifying automatically and on a chance to try again in the runner-up play-offs.

Northern Ireland finished second from bottom of their group so didn't make it either.

Other teams to qualify for the World Cup next summer include Italy, Spain and Germany. 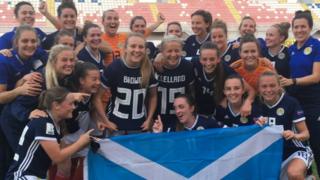 Scotland clinched their first ever place at a Women's World Cup with a dramatic victory over Albania.

Kim Little put Scotland ahead early on but then Albania's Megi Doci levelled just before half-time.

Then Jane Ross' header put the Scots back ahead and the team held on to the lead until the end of the match. 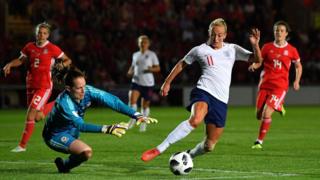 There were no goals in the first half of their match, but England's Toni Duggan, Jill Scott and Nikita Parris scored one each in the second half in a space of 12 minutes.

England manager Phil Neville called it a "great night for women's football", and also praised the Welsh women for how they played.

England finished third at the last World Cup in Canada but for now, their manager isn't thinking too far into the future.

Neville said: "I am happy we are going to France, I am not totally happy with the way we played, we can play better but we have some good players."

The girls fighting to play football in Brazil