The UK should start producing lab-grown meat to help solve the world's food crisis, according to a research group.

It comes as demand for meat around the world is expected to increase by 70% by the year 2050.

So could people be eating lab-grown meat in the future? Read on to find out.

What is lab-grown meat and how is it made? 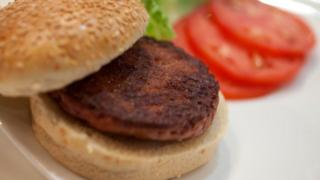 Usually animals like cows are killed to produce the meat that people eat, but scientists have found a way to make meat in a laboratory without killing any animals.

Animals are made up of stem cells, which form special tissue like nerve or skin cells.

Scientists worked out how to take cells from an animal - like a cow- and multiply them in a special container called a Petri dish. 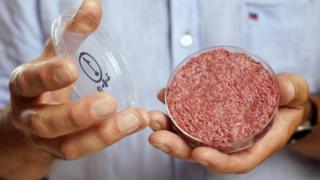 Eventually from one tiny muscle cell, tens of billions of cells can be grown. These join together to form muscle tissue.

Lots of strands of muscle tissue together can form 'meat'.

When two food critics tried the burger in 2013, one said it was "close to meat, but not that juicy" and another said it tasted like a real burger. 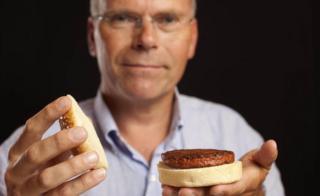 PA
Dr Post helped make the first lab-grown burger, which had beetroot juice added to get the right colour

It's not just beef that is being created, companies are also working on other meat like turkey and chicken.

Why do some people think it's the food of the future?

The Adam Smith Institute says moving away from the current way meat is produced would help reduce greenhouse emissions by up to 96% and free up 99% of the land used in farming worldwide.

They also think it will reduce cases of food poisoning because the meat is grown under such controlled conditions.

Jamie Hollywood from the Adam Smith Institute also told the BBC lab-grown meat could be a lot cheaper. 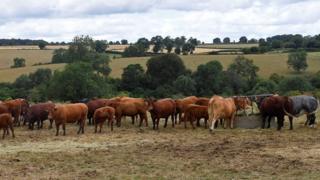 The plan for lab-grown burgers has won support from some animal welfare groups, who think it could stop animal suffering.

Critics say lab-grown meat is not the way to solve world hunger. What is needed, they say, are policies that allow farmers to produce more food more efficiently.

A lot of people also say meat grown will never taste as good as that from an animal.

Should it be called meat?

A company in the United States, which is making lab-grown meat or 'clean meat' as they call it, says people will be able to eat it in American restaurants by the end of 2018.

There is no date for it to be available in the UK yet.

But should a burger or a chicken nugget, which has been grown in a lab, be called meat? 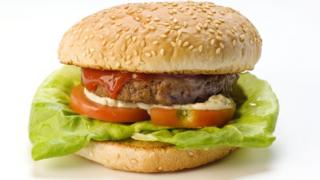 Dr Post thinks it should be called meat because he says "it is meat".

But the Meat Processors Association, which represents the meat industry, disagrees.

Meanwhile, in the United States on 28 August, Missouri became the first state to pass a law banning companies from "misrepresenting a product as meat that is not derived from harvested production livestock or poultry."

Would you eat it or does it sound too weird? Let us know what you think about lab-grown meat in the comments.

Meat-eating 'must be cut down'

Veganism: What is a vegan and what do vegans eat?

Scientists say processed meat could be bad for you