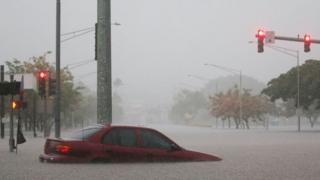 Hurricane Lane has been downgraded to a tropical storm as it heads towards the US state of Hawaii, but is still causing flash flooding and landslides.

Schools and offices were closed as people took shelter from the storm, which hit the islands with strong winds and torrential rain.

Hawaii looks to have missed its first direct hit by a major storm in 25 years.

President Donald Trump earlier declared a state of emergency for the state.

The White House said authorities were on standby to provide support and supplies to local and state emergency response efforts.

How are local residents dealing with the storm? 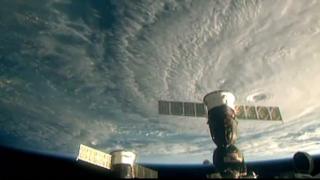 NASA
This is what the approaching hurricane looks like from space

As the storm neared the islands, it brought winds of 125mph and heavy rainfall.

On Hawaii's Big Island more than 30cm of rain fell on Thursday.

Meanwhile United Airlines said it had cancelled all Friday flights to and from the main airports on Maui, the second-largest island.

Roads were closed due to the landslides and images of cars attempting to tackle the deep waters were posted on social media. 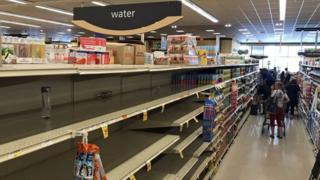 Residents in other areas of the Big Island were caught out by the flash floods with several vehicles becoming trapped.

Hawaii Governor David Ige urged residents to stock up on supplies of water, food and medicines as a precaution and to avoid driving if possible.

Dozens of evacuation centres were also set up throughout the day as Mr Trump urged Hawaiians to keep inside and prepare for the worst. 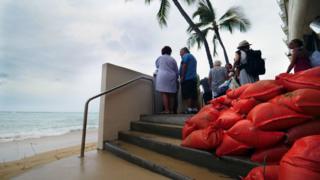 Hawaii is in the Pacific Ocean 2,100 miles away from the mainland United States.

In the state's history, only two hurricanes have ever come within 350 miles of the islands, according to the NWS.

Hawaii volcano: Poisonous gas and shards of glass created as lava from the Kilauea volcano hits the ocean