Meet the mysterious light in the sky called STEVE

Scientists are baffled by a colourful light in the sky in Canada, which people are calling STEVE!

The phenomenon gets its nickname from its full title - Strong Thermal Emission Velocity Enhancement.

It has been appearing in the sky for years, but scientists only started to study it in 2016.

Researchers originally thought STEVE was a type of aurora - a natural light display in the sky that can be seen in the Arctic and Antarctic. 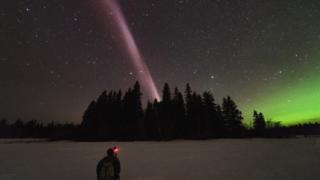 Auroras are caused when electrically charged particles from the Sun enter the Earth's atmosphere.

But now research has shown that the same process doesn't cause STEVE, so no one is sure how it happens.

The researchers are continuing to study the mysterious light in the hope of finding out exactly what causes it.

The Northern Lights seen from space