Two former members of American President Donald Trump's election team are in trouble for breaking the law in the United States.

The crimes of one, former campaign manager Paul Manafort, took place before he started working with the president.

Those of the other though, Michael Cohen, are much more complicated.

But what have both men done and how might this now affect President Trump?

More on US President Trump

Trump to 'keep migrant families together'

Who is Paul Manafort? 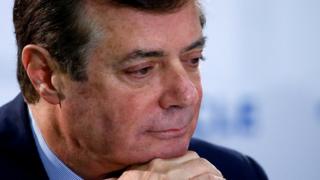 Mr Trump's former campaign manager, Paul Manafort, has been found guilty of tax and bank fraud at a trial in Virginia, USA.

Fraud is lying or deceiving someone in order to make money.

Mr Manafort worked for Mr Trump's presidential campaign for five months in 2016 - but his crimes were not connected to the president.

The president has since tried to distance himself from his former adviser.

President Trump said he was very sad at the verdict.

Mr Manafort faces another trial over a different set of allegations later in the year.

Who is Michael Cohen? 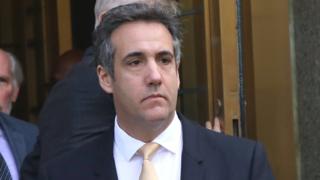 Reuters
Michael Cohen was one of President Trump's closest advisors

Donald Trump's former lawyer has turned against his old boss and accused him of breaking laws about how money is used during elections.

At a court hearing in New York, Michael Cohen said that during the 2016 presidential race he'd been told by Mr Trump to give money to two women who claimed to have had relationships with Mr Trump.

This was, he says, to keep them quiet - in other words to stop them telling newspapers or magazines about their alleged relationships.

Mr Cohen says he did this to help Mr Trump win the election.

Mr Trump's aides deny that he had relationships with the women and say he did nothing wrong.

Cohen has made a deal with US lawyers to try to avoid spending years in jail for breaking the law.

Does this mean Donald Trump is in trouble? 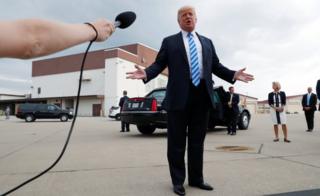 Legal experts says he is unlikely to face criminal charges as long as he remains president.

What is possible is that he could be sacked over "high crimes and misdemeanours" using a rule called impeachment.

The process of impeaching a president is not simple.

It has to be started by the House of Representatives - one half of the United States Congress which makes laws - and only needs a simple majority to pass.

A trial will then be set in the Senate, which is the second part of Congress. But here, a two-thirds vote is needed to sack the president.

No US president has ever been removed from office this way before.

Donald Trump's visit: Why is he visiting the UK?