There have been even more wasps around this summer than normal.

It could be partly down to the summer heat wave, with the warm conditions causing fruit and flowers to ripen earlier.

But you saw a yellow and black striped insect flying around the garden, would you know if it was a wasp, bee, or a hornet?

They look similar but they're very different in terms of where they live, what they eat, and how likely they are to sting you.

Here's some tips to help you tell the difference next time you spot those black and yellow stripes flying through the air. 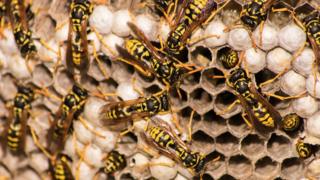 mammuthone
Like honey bees, wasps make nests, but unlike bees they don't produce any honeycomb

There are thought to be more than a hundred thousand different types of wasp, and new species are still being discovered.

Wasps are carnivores and use their stingers to kill and lay their eggs INSIDE their prey. (Before you worry... humans aren't prey to a wasp!)

This means that wasps can sting more than once, but as long as you don't disturb their nest or swat at it by flapping your arms - it won't sting you. 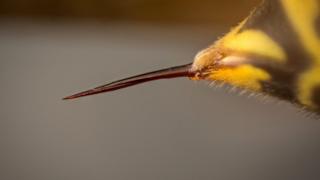 Wasps make their nests out of small pieces of wood which they chew to a pulp and spit out to build their walls.

This forms a texture similar to paper.

You can spot a wasp by its bright yellow and black rings, defined waist and tapered abdomen.

Bees are flying insects that collect nectar and pollen to make honey.

They live - and store their honey - in complex hives made from wax, also known as honeycomb.

There are almost 20,000 known species of bees, so how they look can differ quite a lot.

But bees are generally easy to spot because of their golden colouring and the tiny hairs all over their bodies which make them appear 'fuzzy'. 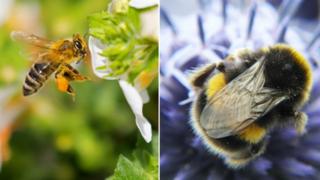 Getty Images
Honey bees, on the left, are often mistaken for wasps because they look so different to other type of bee like bumblebees

When a bee stings a human, its stinger becomes embedded in the skin which kills the bee - this means the chances of getting stung are very low unless the bee feels attacked.

Fun fact: One bee will only make 1/12th of a teaspoon of honey in its entire life! 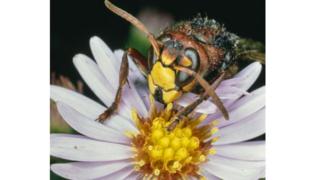 Hornets are specific types of wasp and are usually a little rounder and fatter than the common wasp.

Although they nest in the same way, hornets are known to be less aggressive than wasps if unprovoked.

Hornet stings are also more painful to humans than typical wasp stings because of the chemicals found in hornet venom.

That's because hornets and wasps don't die after stinging as their stingers are not pulled out of their bodies.

An easy way to tell hornets and wasps apart is their brown, red and yellowish-orange markings with little black on the body.

They can grow to be a whopping 5.5cm in length.

Fun fact: People in Japan like to eat giant hornets, both fried and raw!

How to make a bee paradise