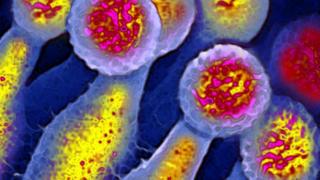 The way that we treat illnesses has changed a huge amount over the last century.

On 28 September 1928 - 90 years ago - a substance was discovered that completely transformed the history of medicine.

It was called penicillin and it was the world's very first antibiotic - vital for creating medicines to kill bacterial infections.

One of the most interesting things about the drug is that it was discovered almost by accident!

We take a look back at its amazing story.

Where did penicillin come from?

Ninety years ago, doctors weren't able to treat certain conditions that nowadays are much easier to deal with, simply because they didn't have the right medicines.

Something as simple as a sore throat could prove to be fatal if the infection spread to the lungs, and pneumonia and infections after operations used to kill one in every three people who got them.

At the time, a man called Alexander Fleming was a scientist working at St Mary's Hospital in London, carrying out research into the influenza virus. 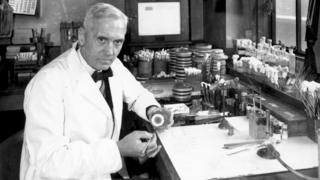 One day, he went on holiday. When he returned to his laboratory, he discovered something very strange had taken place.

Before he had gone away, he hadn't cleared away all of the dishes of bacteria that he had been working on and a blob of mould had developed in one of his dirty dishes.

But while bacteria was growing everywhere else in the dish, none was growing around the mould.

This told Mr Fleming that something in the mould was killing the bacteria.

He worked out what this substance was and called it penicillin. It was the world's first antibiotic.

What is an antibiotic?

An antibiotic is a substance that destroys or limits the growth of micro-organisms, like bacteria.

Natural antibiotics are produced by living organisms (like penicillin, being produced naturally by the mould), but they can be man-made in a laboratory, in which case they are called synthetic antibiotics.

Antibiotics do not work on viral infections.

It comes from Greek, where 'anti' (ἀντι) means 'against' and 'bios' (βίος) means 'life', as they kill the life of bacteria.

It was another 12 years after the substance's initial discovery before it was ready to be widely used as a medicine.

Alexander Fleming was knighted in 1944 and won the Nobel Prize for his discovery.

Why is penicillin so important?

The discovery of penicillin marked the start of the development of an important group of medicines called antibiotics - special bacteria-killing drugs.

Penicillin itself would become responsible for killing the different bacteria responsible for many serious human infections - for example, tonsillitis, pharyngitis, bronchitis and pneumonia.

It is known as a broad-spectrum antibiotic because it kills a wide range of bacteria. 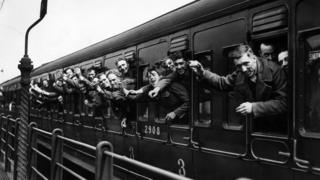 Its discovery didn't only help to cure people of numerous infections, but it also allowed doctors and surgeons to carry out more invasive treatments, which would not have been possible before because of the risk of deadly infections.

During WW2, it saved the lives of almost one in seven UK soldiers wounded in battle.

What are the problems with penicillin?

The story of penicillin hasn't been without its problems.

By the 1950s, doctors were prescribing it so much that some bacteria were learning how to fight against - or resist - the drug. This meant that penicillin wouldn't work!

During a global epidemic of flu in 1957, many people died because the drug simply couldn't kill the bacteria. 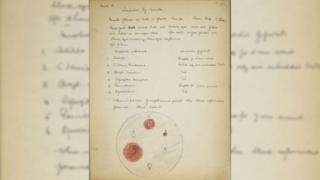 British Library Board - Add. 56162, f.2
This picture from the British Library shows some lab notes made by Sir Alexander Fleming from 11 December 1928 about mould

A team of doctors worked to create the second generation of penicillins, such as methicillin and ampicillin (which are also antibiotics) and antibiotic development continued in the years to come.

Over 100 new antibiotics have been discovered since 1928, but resistance to them is still a problem even now.

What are the challenges with penicillin today?

Medical research is still going on to develop new antibiotics to fight bacteria.

But at the same time, bacteria continues to 'learn' to change so that the antibiotics can't kill them off anymore.

The more antibiotics are used, the quicker that bacteria can 'learn' to change like this, which is why it is important that they are not overused.

Experts say that doctors sometimes prescribe them - and patients have asked for them - when they perhaps don't really need them.

Medical experts continue to warn of the dangers of overusing antibiotics, while scientists continue work to develop them.

•His laboratory and written work was rather chaotic! According to the British Library, researchers have spent hours trying to make sense of his messy notebooks

•He warned the American Association of Penicillin Producers about antibiotic resistance in a speech in 1945, so he was forward-thinking

The challenge is finding chemicals that can kill bacteria, but which aren't harmful to humans.

In total, it takes around 10 to 20 years from the discovery of an antibiotic chemical to it being turned into a fully functional medicine.

Governments, organisations and members of the public also work to raise awareness about only using antibiotics when it's absolutely needed.

Invisible conditions: Bridget shows us what school life is like with lupus