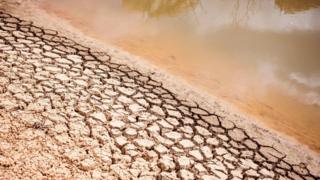 WIKUS DE WET
This picture shows scorched earth and low water levels in South Africa, as a result of droughts

Scientists studying the effects of climate change have warned that we need to make massive changes to the way that we live our lives in order to tackle the problem of global warming.

They've also said that we need to do more than we previously thought we did.

A target was in place for us to try to stop the world's temperature from rising by any more than 1.5°C. Not only are we not meeting that target, but the report suggests that the world is in fact heading for a 3°C increase in temperature.

This could have huge consequences for the planet and experts are calling on world leaders to tackle the problem urgently.

According to the report - which has taken scientists three years to put together - keeping the temperature rise to under 1.5°C will require "rapid, far-reaching and unprecedented changes in all aspects of society".

It explains that time is running out and it will be hugely expensive, but the opportunity to do something is still possible - if action is taken now.

What do they say we need to do?

In the report, scientists outline steps we can take to help the world's temperature to stay under the 1.5°C target.

What happens if we don't take action?

Basically, they say it would be very bad news for the planet.

Coral reefs would be wiped out with a 2°C increase in temperature and global sea-levels will rise around 10cms, which would increase the risk of flooding for millions of people around the world.

The ability to grow certain crops like rice and wheat could also become more difficult.

Is this a new issue?

The short answer is, not at all.

Back in 2015, leaders from 195 countries around the world got together to sign something called the Paris Agreement, which was a huge international deal making promises to do something about climate change. 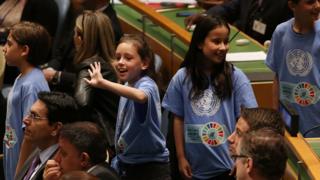 One of the big things that leaders agreed was to take steps to stop global temperature increasing by more than 2°C - and to try to limit it to 1.5°C.

But one of the heads of this new study Prof Jim Skea believes that we now need to go further than what was agreed in the Paris deal. "Just fulfilling the pledges made in the Paris agreement for 2030... is not good enough," he said.

Watch this video from 2015 which explained the issues around climate change ahead of the Paris agreement being signed.

In August 2018, a big report was published about something called Hothouse Earth conditions.

The international team of climate researchers behind the report explained how they believed the world is at risk of tipping into extremely dangerous levels of climate change - 'Hothouse Earth conditions' - when some parts of the Earth could actually become unsuitable for people to live in anymore.

They said current global warming could lead to sea levels being between 10-60m higher than they are today, flooding large areas of land. 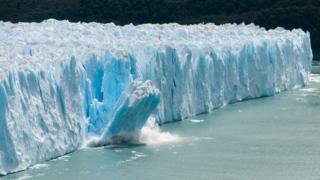 Getty Images
The Hothouse Earth report talked about how melting ice sheets would cause sea levels to rise significantly.

They also explained how forest, oceans and land which currently work to soak up about 4.5 billion tonnes of carbon (they get called 'carbon sinks' because of this) could actually start to emit carbon themselves, increasing the world's temperature even more.

Overall, the report - published in the Proceedings of the National Academy of Sciences - said warming could lead to a higher global temperature than at any time in the past 1.2 million years.

It also suggested that humans had possibly underestimated how sensitive the Earth is to warming.

One of the scientists involved in the report - Prof Rockstrom from Stockholm Resilience Centre - explained how the recent heatwaves and extreme conditions around the world may be helping to show how quickly and dramatically things can change. 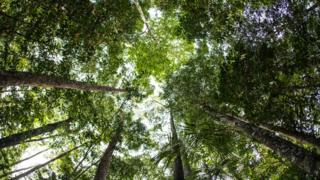 EPA
Experts have said that there are many steps humans can take to help to reverse the effects of global warming, such as planting more trees

The issue is that, while the biggest impacts of all this may not be felt for hundreds of years, once it starts, we won't really be able to do anything about it - so experts say it's important we take steps now to stop the 'Hothouse Earth' situation from happening.

The report included some pointers about how countries might do this, including:

While many scientists say their conclusions are sound, not everyone agrees with what they have written. Some experts say that the picture painted by the Hothouse Earth report is too extreme.

But one thing that everyone seems to agree on at the moment is that humans need to make some big changes in order to protect our planet.

The planet's climate is constantly changing, and has been naturally changing over time.

But many scientists are concerned that it's changing much more than it would naturally do, because of the effect of humans

Many experts say the release of greenhouse gases - such as carbon dioxide and methane - is having a massive effect on temperatures and weather around the world.

These scientists believe when these gases build up in the atmosphere, they act like a blanket or 'greenhouse around the planet. By trapping heat, they lead to an increase in global temperatures, which is called 'global warming'.

Global warming can melt the world's ice caps and glaciers, leading to an increase in sea levels. Some scientists estimate that over the next hundred years, sea levels could rise by between 10cm and 90cm, making many coastal areas around the world uninhabitable.

Some experts also warn it could affect weather patterns, leading to more droughts, flooding and extreme weather, and a rise in ocean temperatures.

What can YOU do to help?

There are several things that you can do at home to do your bit to protect the planet.

Here are five things to get you started!

What is the Paris climate deal and why has Trump pulled the US out?

What is coral bleaching and why is it a problem?