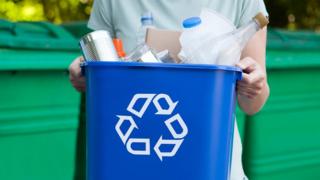 Last month we told you about concerns that some of the waste you put out for recycling might actually be ending up in landfill.

A new report today might help explain why - most of the plastic food containers we put in the recycling bin can't actually be recycled.

It's because of the mixture of plastics used in things like yogurt pots, ready meal trays and other containers, which make them hard for councils to recycle.

The report comes from the Local Government Association (LGA), who represent councils in England and Wales.

They say only a third of plastic waste can be reused, with the rest being sent to landfill.

The LGA say around 525,000 tonnes of plastic pots, tubs and trays are used by households in the UK every year, but only 169,000 tonnes of this waste is able of be recycled.

The LGA told BBC News that black plastic is "being used by manufacturers because it makes the food look good," but it's "almost impossible to recycle".

That's because the black colour can't be easily scanned by recycling machines.

But simply changing the colour of these items would significantly increase the amount of plastic that could be used again.

Another problem is the plastic containers fruit and vegetables often come in.

These are made from up to three different types of plastic, including polystyrene, which can't be recycled.

How could things be improved? 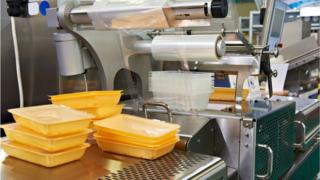 The LGA wants plastics manufacturers to work with councils to prevent materials that limit recycling entering the system in the first place.

Items made from a mix of different plastics are often poor quality, and so the LGA want the government to consider banning them.

The LGA is also looking to the government to make plastics manufacturers pay for the costs of collecting and disposing of plastics that can't be recycled.

The British Plastics Federation, who represents the UK plastics industry, have argued there should be a financial incentive for manufacturers to make packaging from reusable plastics. 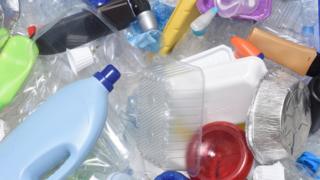 Margarine and ice cream tubs: Often contain a material which is very difficult to recycle. Instead they could be made from the same plastic as water bottles which is more easily processed.

Microwave and meat packaging: The materials can be recycled but need to be sorted by a scanner first. As they are often black, it's difficult for the scanner to 'see' them. A simple change of colour could lead to a real increase in recycling.

Fruit and vegetable punnets: Often three different materials are used for these. Simpler designs and more use of recyclables could make a big difference.

Yoghurt pots: Often made from a mixture of polypropylene and polystyrene, which are difficult to recycle. An alternative is to use the same plastic used for water bottles which can be easily recycled.

Baked goods trays: The lining on these trays for cakes and baked goods is often made from difficult to recycle materials. Other options are available which could boost recycling numbers.