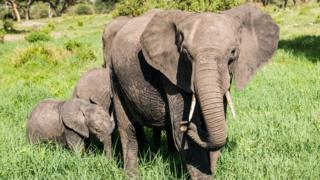 When you think about the animals you'd love to see in the wild, elephants would probably be top of most of our lists.

But what if your hope of one day seeing them in their natural habitat ended - because there weren't any elephants left!

Two years ago Newsround went to South Africa to find out more about the ivory trade, and the devastating impact it's had on the world's elephant populations.

A count of Africa's elephants published in August 2016 found that nearly one in three has disappeared over the past seven years - meaning there was fewer than 400,000 left.

How the UK is SERIOUSLY cracking down on the ivory trade

Guide: What is poaching?

Conservation charity Tusk told Newsround that if elephant poaching is not stopped, then "there is every chance that elephants will become extinct in a number of African countries within the next decade".

But how has the situation changed since then? 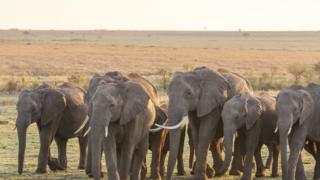 It's very difficult to get exact numbers on elephant population figures, and because the last elephant count - called a census - happened in 2016, there is no recent information.

But African elephants are still listed as vulnerable on the International Union for Conservation of Nature (IUCN) Red List, as they were two years ago.

According to the World Wildlife Fund (WWF), there are now thought to be around 415,000 African elephants left in the wild.

So even though it looks like the numbers have slightly increased, the outlook is still not good, with around 90% of African elephants having been killed in the past century.

The WWF estimate that around 20,000 African elephants are being killed each year for their ivory - that's an average of 55 a day.

African elephants are found in 37 countries in sub-Saharan Africa, but populations in Ivory Coast, Ghana, Guinea, Guinea Bissau, Nigeria, Sierra Leone and Togo have been wiped out over the past 12 years.

More African elephants are now being poached than being born. No one wants to grow up in a world without elephants and the clock is ticking to save them.

Tusk says in countries like Kenya, elephant numbers have stabilised due to the hard work and efforts of the anti-poaching campaign,

However, this in turn has led to conflict between humans and elephants, so work is being carried out to try and put elephants off coming near areas where people are living.

On the other hand, in some areas such as the forest elephants in Mali, West Africa, numbers are at a critical level.

Less than a quarter of elephants actually live in protected areas, and only around 30% of the range of African elephants are officially protected. 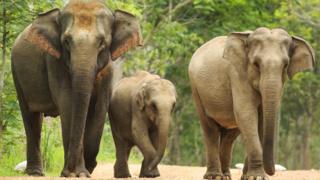 There are around 40,000-50,000 elephants left in Asia, and like African elephants they are listed as endangered on the IUCN Red List.

The number of Asian elephants has declined by at least 50% in the last three generations.

But the reasons why their numbers are falling are a little bit different.

Levels of elephant poaching in Asia are much lower than in Africa, and when poaching does happen, it's mainly as a result of conflict between humans and elephants.

That's because humans often take the land where elephants live in order to farm and develop it, which results in a loss of habitat.

Because of this Asian elephants have disappeared from around 85% of the areas where they used to live, leaving elephant populations spread out over smaller areas.

More than half of the 100 elephants killed each year in India are killed by farmers in a bid to remove the problem of animals raiding their crops.

Another reason why poaching is less common in Asia is because only some male Asian elephants have tusks, and most females don't have any at all. 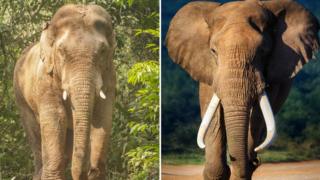 Getty Images
See the difference in the tusks? On the left is male Asian elephant in Thailand, and on the right an African elephant in Addo National Park in South Africa

In contrast all African elephant have tusks, and their tusks are generally bigger, and so contain more ivory.

Sumatran elephants are critically endangered, with less than 2,800 left in the wild.

How serious is the situation?

The World Wildlife Fund says: "More African elephants are now being poached than being born. No one wants to grow up in a world without elephants and the clock is ticking to save them.

"This World Elephant Day we must recognise the issues that threaten African and Asian elephants and come together to tackle them.

"In October, the London Conference on Illegal Wildlife Trade gives us an opportunity to help stamp out this illegal trade, safely securing the future of this and many other iconic species", the charity added.

What's being done to protect elephants?

A number of other countries, including the UK and Thailand, have also begun taking steps to try and ban the sale of ivory.

The hope is that if poachers can't sell it, they won't kill the elephants for the ivory.

But it seems that more needs to be done to make these steps effective.

The World Wildlife Fund says elephants are facing the most serious conservation crisis since an ivory ban was first imposed in 1989.

In March this year, more than 30 countries across Africa called on the European Union (EU) to close down its ivory market, and support efforts to ban the global ivory trade.

Although the EU banned the export of raw ivory last year, trade is still allowed between member states.

Another issue is that, under current rules antique ivory can still be exported, which dealers are using to try and smuggle newer ivory to Asian markets. 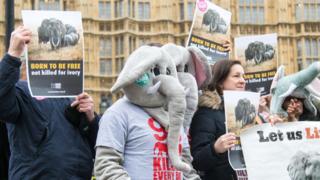 Getty Images
Last year there were protests outside the Houses of Parliament in London, calling for a ban on the ivory trade

In other countries there have even been signs that laws designed to protect elephants could be relaxed.

Last year US President Donald Trump decided to allow hunters to bring elephant trophies from certain African countries into the US - something which had been illegal since 2014.

Elephant trophies are things like the tails of elephants, which hunters keep to show off their hunting skills.

But just a day later he changed his mind, saying he'd keep the trophy ban in place, until he's had more time to "review all conservation facts".

What is World Elephant Day?

It takes place on 12 August.

The goal of International Elephant Day is to create awareness of the dangers facing of African and Asian elephants.

Organisers also want to share knowledge and ideas to help with better care and management of captive and wild elephants.

Conservations have also been working with local communities and using technology to help fight the ivory trade.

A team from Kings College London have been developing ways to use fingerprints left on the ivory to lead them to poachers.

They say that although ivory looks smooth, it has lots of tiny holes that a fingerprint would disappear into, meaning it could be possible to link a person to the illegal trade.

Dogs can also be trained to smell poachers, and sniff out illegal wildlife products, which have been boxed up to be send abroad.

The World Wildlife Fund is using GPS technology to tag and track elephants and rhinos, to help rangers monitor and protect the animals.

A special Wildlife Crime Technology Project, using money given by Google, has also led to drones and surveillance and thermal-imaging cameras being set up at waterholes and places poachers might target elephants and rhinos.

Ivory trade: UK set to crack down with new laws to protect elephants

The baby elephant that kept everyone waiting