Fourth of July: What is Independence Day? 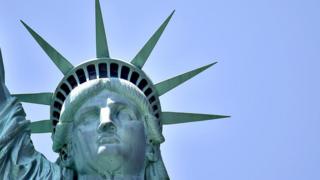 Each year on 4 July, millions of Americans all over the world celebrate Independence Day.

The occasion is normally marked by lots of parades, concerts and food-filled celebrations with friends and family. Offices and schools are closed for the day so people can join in with the festivities.

Famous landmarks are lit up with bright lights and spectacular fireworks displays can be seen in some of America's biggest cities.

While some events will be cancelled or smaller than usual due to the pandemic, many events will go ahead around the country, with people expected to follow social distancing rules.

Your dictionary of US politics

The Oxford English Dictionary says independence is "exemption from external control or support; freedom from subjection or from the influence of others; individual liberty of thought or action." 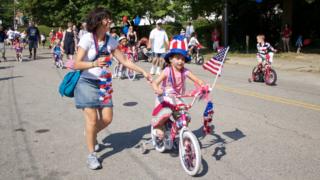 What it basically means is that if a country is truly independent:

So when a country celebrates an independence day, it is marking the date from when it was able to rule itself - usually after being ruled by another country.

While it may be Independence Day for people in America on 4 July, there are many countries all over the world which have their own independence days.

For example, 11 November is Independence Day in Angola, when the country celebrates the date in 1975 from when it was no longer ruled by the Portuguese.

On 9 July, Argentineans celebrate their independence, when - in 1816 - the Spanish were no longer in charge of them. 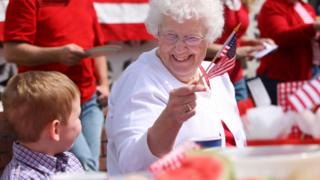 Independence Day in America marks the date back in 1776 when Americans broke away from being ruled by the British, who had been on the continent since the 16th Century.

Back then, America was divided up into 13 colonies:

People who lived there used to have to pay taxes to Britain, even though they didn't have anybody representing them in Parliament.

Eventually, people had had enough of being ruled by London. 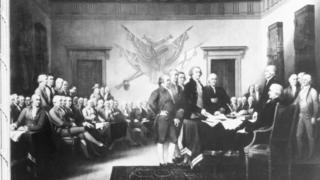 Getty Images
The signing of the document - once it had been declared - actually took place over a series of months. This picture shows delegates to the Second Continental Congress signing the Declaration of Independence in August of that year

In June 1776, a group called the Colonies' Second Continental Congress came together in Philadelphia in order to put together a document to finally cut ties with Great Britain. (Philadelphia used to be the political capital of America - not Washington!)

The document was written and tweaked and rewritten until - after 86 changes - everybody was happy. The final version was finished on 4 July 1776 and the colonies declared themselves no longer part of the British Empire.

The very next day, the document - called the Declaration of Independence - was sent around to everyone. 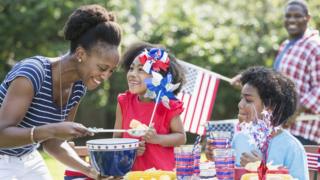 Fighting between the Americans and the British did carry on after this date, but a few years later the British Parliament also officially recognised America's independence.

The Declaration of Independence is now one of the most important symbols to American citizens of their freedom and of what makes their country the United States.

In 1870, Independence Day was formally established as an official holiday by Congress, but workers weren't paid for that day. In 1938, it became a paid national holiday across the whole country.

Now, Independence Day in the US is celebrated as the birth date of the nation as we know it today.

Take a tour of a US high school

America vs Food - a Newsround special