Muslims across the world will be celebrating Eid al-Adha this week.

In the UK, Eid al-Adha will be celebrated around the 20th or 21st of July. Like other Muslim festivals, its date is calculated based on the sighting of the moon, so cannot be predicted exactly.

The name is often shortened to 'Eid'. You may have also heard of another festival called Eid al-Fitr, which is referred to as 'Eid' as well.

Read on to find out more about both of these festivals and the differences between them.

What is Lent and why do people give things up?

Each year Muslims celebrate both Eid al-Fitr and Eid al-Adha, but the names often get shortened to just 'Eid' and that's why it can be confusing.

Eid al-Fitr - which means 'festival of the breaking of the fast - is celebrated at the end of Ramadan, which is a month when many adult Muslims fast.

Eid al-Adha - which means 'feast of the sacrifice' - is celebrated just over two months later, at the same time when many Muslims perform the Hajj pilgrimage.

Festivals in Islam are based on the lunar calendar (based on the phases of the Moon), which is around 11 days shorter than the solar calendar, (based on the Sun) - the calendar which most people around the world use in their day-to-day life.

Being based on the lunar calendar means the dates of both Eids change each year, but Eid al-Fitr is always a little over two months before Eid al-Adha. 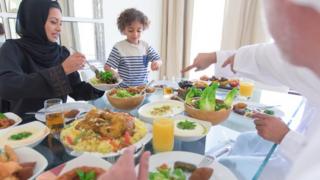 Getty Images
Eid meals with family and friends are usually a big part of the celebrations.

For both Eids, many Muslims usually go to special Eid prayers at their local mosque and have a day of celebrations with family and friends.

Chat: How will you be celebrating Eid al-Fitr?