The large block of flats was completely destroyed, and 72 people lost their lives.

Many more were injured, with it later emerging the blaze started on the fourth floor and spread through the building.

The fire was one of Britain's worst modern disasters.

A public inquiry was started in 2017 to look into what happened.

Upset by the news 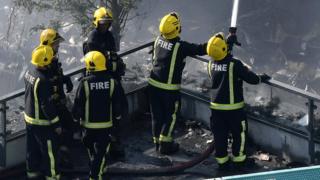 Very early in the morning on Wednesday 14 June 2017, a fire broke out in the kitchen of a flat on the fourth floor in Grenfell Tower in North Kensington, London.

Firefighters arrived at the scene within six minutes of the fire starting, but it spread extremely quickly throughout the building's 24 storeys.

Mobile phone footage shows it took less than 30 minutes after firefighters had arrived for the fire to reach the top of the building.

It took about 24 hours to get it under control.

As a result of the blaze, 72 people lost their lives and many more were injured.

All those who managed to escape were made homeless, as the building - which had recently been refurbished - was completely destroyed.

It also destroyed homes in the surrounding area.

Experts described the fire as "unprecedented", which means that nothing like it had ever happened before. 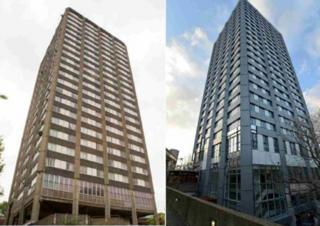 In the days and months following the fire, there was a big recovery operation.

Lots of people got involved to try to help those affected by what happened. 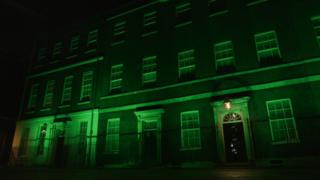 Press Association
To mark the one-year anniversary of the Grenfell Tower fire, buildings across the UK were lit up in green to remember the victims. In this picture, you can see Downing Street - where the UK prime minister is based - lit up in green

Churches, mosques and community centres all offered clothes, food and water, and many members of the public donated items and money.

Figures from the Red Cross suggest 40,000 boxes of items were donated, which 600 volunteers helped to sort through.

By July, nearly £20 million had been raised to help victims. 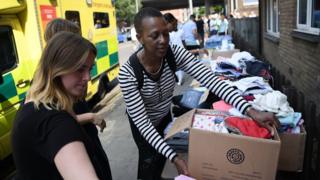 A group of stars released a single to help to raise money, which went straight to the top of the iTunes charts.

Six months after the tragedy, a memorial service was held to remember those who had lost their lives and been affected by the tragedy.

Why did the fire happen?

The first thing many people wanted to know after the fire was how it had happened and why it spread up the building so unusually quickly.

Some experts believe that a material used as 'cladding' on the outside of the building played a part in this. 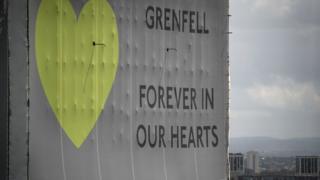 Cladding is used on buildings to help to protect them from the weather and to make them look nicer.

A public inquiry started in September 2017 looking into what happened on the night of the fire. Part of it will examine the causes - and what, if any, role the cladding and other factors played in making the fire spread so quickly.

Towns and cities around the country were told to give details to the government about the cladding used on their tower blocks.

Many more people who lived in the same area as the tower had to leave their homes, as their buildings had the same cladding as Grenfell Tower, and experts wanted to check that where they lived was safe.

Checks have also been done to make sure that apartment blocks have the right safety features like smoke alarms and sprinklers. 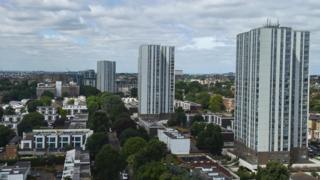 A big investigation, called a public inquiry, has also been looking into exactly what happened.

Although the government ordered it, it's been led by an independent chairperson.

On Wednesday 30 October 2019 a report following the first phase of the inquiry will be published. This first phase looked at what happened on the night of the blaze.

The report has been described on the inquiry's website as a "substantial document which includes a detailed description of the events of the night of 14 June 2017 as well as the Chairman's findings about the nature of the building, the origins of the fire, its subsequent development, the response of the London Fire Brigade and the steps taken by the other emergency services, all fully supported by references to the evidence."

The report also contains a number of recommendations to the Prime Minister.

The second phase of the inquiry, which is due to start in January 2020, will focus on the wider circumstances of the fire, including the building itself.

The Metropolitan Police is also looking into whether or not a crime was committed with what happened.

It is a huge investigation as the incident is so serious.

In June 2019, the force said about 7,100 statements had been taken from witnesses, community and family members, emergency services personnel and others.

How have the victims of the fire been remembered? 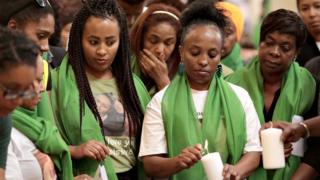 Getty Images
One year on, people across the UK remembered those affected by the Grenfell Tower tragedy. Here, people are lighting candles as they attend a special memorial service

On the one-year anniversary of the fire, many people across the UK fell silent to remember those affected by what happened and those who lost their lives.

Memorial events were also held, especially in the area where it happened. A garden of peace and healing was unveiled too.

If you're upset by this story or anything else that you see in the news, click here for advice.