There will be a national minute's silence to remember the people killed and injured in the London Bridge attack a year ago.

On 3 June 2017, eight people died and 48 others were injured when a white van hit pedestrians on London Bridge at about 10pm.

Three men then got out and attacked people in nearby Borough Market.

Police arrived within a few minutes and the three men believed to be responsible for the attack were killed by officers.

A private service remembering the victims will be held at Southwark Cathedral today, and lots of other events are taking place to mark the anniversary of the attack.

The hashtag #LondonUnited was projected onto London Bridge on Saturday night and will be done again on Sunday. 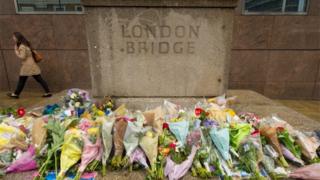 The service at Southwark Cathedral will honour the emergency services' response to last year's attack, as well as remembering the people killed and injured.

Afterwards a short procession will go from the cathedral to Southwark Needle, at the corner of London Bridge, where there will be a national minute's silence at 16:30.

A year on from the London Bridge attack, Prime Minister Theresa May said the UK's determination to overcome the threat of terrorism "has never been stronger".

She said the "stories of courage" from that night will always stay with her.

London Mayor Sadiq Khan said he was "proud" of the way the city had responded to terror attacks, by "standing united in defiance and staying true to our values and way of life".