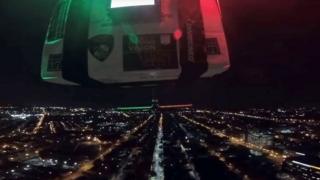 A kidney needed for a transplant operation has been delivered to the hospital where it was needed by drone for the first time ever.

A drone cam video from of the University of Maryland Medical Center captured the journey, as seen in the photo above.

The specially designed drone was fitted with equipment so that the kidney could be monitored as it made its three-mile journey to its recipient. 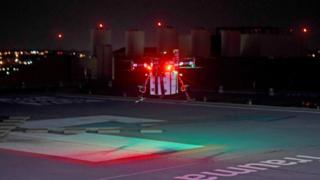 But this is far from the first time we've heard of drones being used for some pretty amazing things, or to make jobs quicker and easier.

Google Wing will deliver takeaway food, coffee and medicines by drone to about 100 homes in Canberra, the country's capital city. 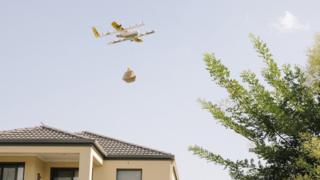 Wing's drones deliver small packages, which are lowered into customers' gardens on a length of string.

However, the approval has several conditions attached. The drones will only be allowed to fly during the day and not before 8:00am at the weekend.

They will also not be allowed to fly over crowds or main roads. 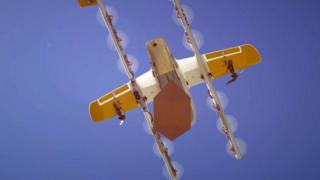 But it's not just Australia that's getting in on the home delivery drone action.

In 2016, the UK government got together with the retail giant Amazon to start testing flying drones that can deliver parcels to your door.

Just over two years later, the system is still in development.

But if it's rolled out, it would mean that customers could place Amazon orders and receive their package very quickly.

Rules that previously blocked such services in the UK are being changed, with the National Air Traffic Control Service relaxing the rules

Could this pave the way for a sci-fi future where parcel-carrying drones clutter our skies? Some tech experts say we could see drones bringing boxes to our front doors as soon as this year.

When you order a takeaway, you'd generally expect to see a van from the company pull up with your extra cheesy pizza inside, or maybe someone on a bike, bringing you your chicken nuggets with extra mayo. (Yum.) 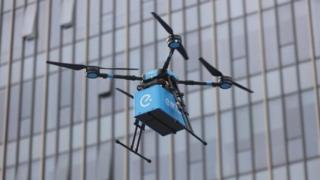 Well, drone-delivered meals is a thing in Shanghai in China. Don't get too excited though - the drone doesn't actually come to people's doors.

That job is still down to a person, but the drone speeds up the delivery.

When the meal is ready, a delivery rider takes it a short distance to the nearest drone station to the food provider. 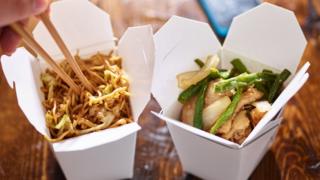 Then, the drone carries the meal to the drone station nearest to the person who ordered the food, and another delivery rider picks up the food and takes the food to that person's door.

The service has launched on the outskirts of the Chinese city, and is flying meals along 17 particular routes, bypassing busy roads that would normally mean your meal arrives late as well as cold.

In 2015, we saw one restaurant in Singapore trying out a group of flying drones able to deliver dinner to your table.

Infinium's robots whizzed above the heads of diners on paths mapped out by a computer program, finding their way using infra-red sensors placed around the restaurant.

At the start of last year, the world's first ever driverless passenger drone was tested in southern China.

Passengers simply get in, belt up and let the drone drive itself to where they need to be, travelling at speeds of up to 100km per hour.

We bet that would be a fun ride!

One farmer in Ireland didn't have a sheepdog, so his brother decided to try out using a drone instead.

The little remote-controlled aircraft encouraged the sheep into their pen.

He said it took 3 mins 21 seconds to get them from one side of the field to the other using the gadget.

If plastic ends up on beaches it can easily get into the sea, and cause harm to fish and animals.

This issue is that no one knows where all the plastic is - so one charity had the idea of using drones to find out.

The drone flies high up in the sky, and takes pictures of the land below.

Any plastic in the photos can then be tagged so it can be removed.

Some beaches in Australia have a real problem when it comes to sharks.

The ocean predators can sometimes end up too close to the shore, either by accident or whilst looking for food.

Many beaches have lifeguards and shark spotters to keep an eye out for the beasts, and to keep people out of the water when they appear.

But experts have tried out another idea - you guessed it, drones!

They think that eyes in the sky are better at spotting sharks than humans.

This one's just for fun, but it's actually become a pretty big sport - drone racing!

This next video shows when, in summer 2017, thousands of people came to watch the world's best pilots race around an obstacle track in the Drone Champions League.

Paris's most famous street, the Champs-Elysees, was even closed for the weekend - to make way for the drones.