Storms and heavy rain have caused floods across the West Midlands.

The Environment Agency has issued more than 20 flood warnings and more than 40 flood alerts are in place covering much of Central England.

In Birmingham more than a month's worth of rainfall fell in just one hour on Sunday.

On Monday a man in his 80s died in Walsall after his car got caught in the flooding.

The Met Office has issued amber weather warnings for rain and thunderstorms in East Anglia, London and the South East and the South West of England, this afternoon.

But even with all the rainfall, the South East could also experience the hottest day of the year so far.

The Met Office - which forecasts the UK's weather - said temperatures could be as high as 28C or 29C.

Homes and roads in Northamptonshire have also been flooded after heavy rainfall overnight on Sunday, with major roads closed. 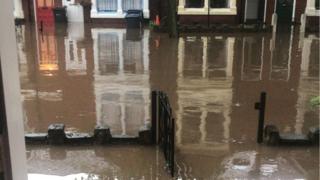 The Met Office said a site at Winterbourne, in the Birmingham area of Edgbaston, recorded 58mm of rainfall in just one hour on Sunday afternoon, and 81mm in a 12-hour period.

The monthly average for the West Midlands region in May is 55mm. 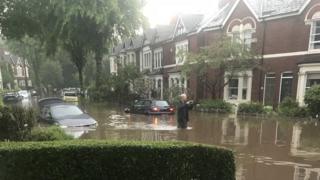 This was the scene in Selly Park

On one road, in an area called Selly Park, homes flooded and cars were under water, while wheelie bins floated down the road.

But in other parts of Birmingham, the rain hasn't been as heavy. At another site 10 miles away, just 3mm of rain was recorded in 12 hours.

West Midlands Police said some roads in Birmingham were still affected by flooding and advised drivers not to ignore road closure signs.

It was impossible to travel along one of the city's major road routes, because the water was up to 5ft deep.