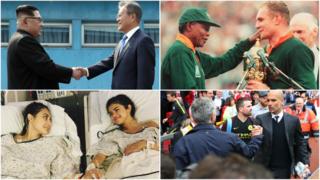 People shake hands all the time. To say hello, to make friends... there are lots of reasons.

(In fact, there's even a guide to why we shake hands right here.)

But some handshakes can have particular significance and one such handshake has taken place between North Korea Kim Jong-un and US President Donald Trump.

The pair met at the border between North and South Korea as Donald Trump crossed into North Korea, becoming the first serving US president to do so.

More about US politics

Donald Trump being sued by 16 US states

Why does he want to build a wall?

What are the US mid-terms? 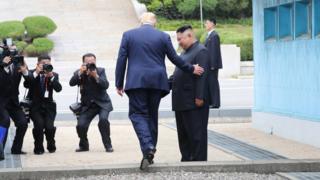 Donald Trump hopes the meeting will open up talks towards peace between North and South Korea and may help trigger negotiations towards getting rid of North Korea's North Korea's nuclear weapons.

To mark the occasion, we take a look back at some important handshakes that got everybody talking.

US President Donald Trump has already made history with a handshake.

The world was watching as the two man shook hands. 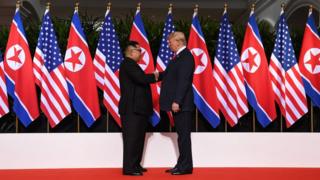 The meeting between them was to discuss how the countries can end the arguments they have had about North Korea's nuclear weapons.

But this wasn't the only of Kim Jong-un's handshakes that has recently made history.

At the end of April 2018, he shook hands with another man in a move that was called one of the most important handshakes in over 50 years. 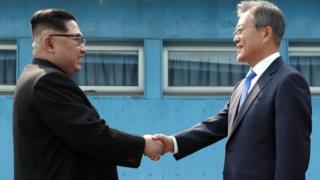 North Korea's Kim Jong-un and South Korea's Moon Jae-in shook hands at the border between the two countries, before symbolically stepping back and forth across the border.

Since the Korean war ended in 1953, North and South Korea have been enemies. But after this meeting the two leaders agreed to turn their border into a 'peace zone'.

What do we know about North Korea?

Shaking hands always makes a good photograph and when people who have been rivals or enemies do it, it can make big news all around the world.

In this next picture, we see South Africa's President Nelson Mandela congratulating South Africa's rugby team captain François Pienaar, after his team's victory in the World Cup final back in 1995.

At the time, South Africa was a deeply divided country. It had only just ended apartheid - a racist system where white and black people in the country lived separate lives.

Nelson Mandela had just been elected president - the first black person have the job - and he wanted to bring people of different races together in South Africa. 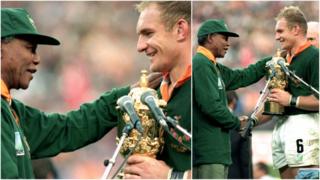 Rugby in South Africa was a sport heavily linked to the white apartheid rulers.

However, the World Cup slogan had been "one team, one country", with the organisers hoping the event would bring the country together behind the national team.

Mandela gave his support to the South African team, which helped to unite the country. Nothing symbolised Mandela's hope for the new South Africa like him shaking hands with the country's rugby captain.

After country's leaders come together to resolve conflict, this often ends up in a historic handshake - and the end of World War Two was no different.

This next picture shows the moment that British Prime Minster Winston Churchill, US President Harry Truman and Russian leader General Stalin shook hands during the Potsdam Conference which took place between 17 and 25 July 1945. 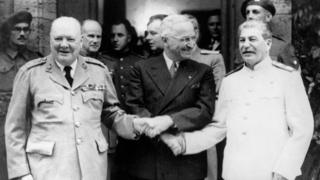 By the end of the conference, it had been decided what was going to happen with Germany at the end of World War Two.

The three countries working together like this was significant as Russia would not have traditionally allied itself with the US and Britain.

Once World War Two had finished, there would be conflict between these nations as the Cold War got under way.

The Queen and Martin McGuinness

In June 2012, there was an significant handshake between the Queen and Northern Ireland's former Deputy First Minister Martin McGuinness, which was seen as a remarkable symbol of peace between Northern Ireland the rest of the UK.

Only a few years before it took place, many people never thought such a moment could happen. 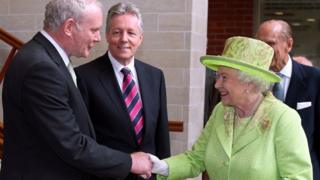 In 1970s, there was a lot of conflict in Northern Ireland about whether it should remain part of the UK or leave and join the Republic of Ireland.

As part of the fighting, the Queen's cousin Lord Mountbatten was killed in a wave of violence for which Mr McGuinness was one of the leaders.

The handshake was the first time that the two had appeared in public together and represented how much the situation had changed since the Good Friday Agreement was signed in an effort to bring peace to the situation.

You can find out more about this historical handshake between the Queen and Mr McGuinness here. 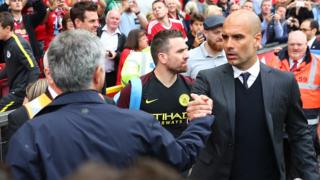 They'd shaken hands many times before but for some reason everyone was waiting to see if Pep Guardiola and former Manchester United manager Jose Mourinho would shake hands as managers of the two big Manchester clubs.

When they'd been rival managers in Spain (Pep at Barcelona and Jose at Real Madrid), there had been some nasty arguments between them and they'd been really unfriendly towards each other.

They worked in different countries for a few years, but once Jose got the job at Manchester United they were back as rivals and everyone was wondering, would they or wouldn't they shake hands?

Well, people needn't have worried, as the two men did indeed engage in a handshake.

Jose Mourinho said he didn't understand why people were even asking the question and Pep Guardiola said they were both "polite guys" who simply "want to win". 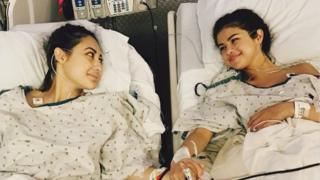 It's more of a hand-hold than a hand-shake, but this perfectly sums up the incredible friendship of Selena Gomez and her friend Francia Raisa, who donated an organ to her.

As the two recovered side by side in their hospital beds, Selena said: "She gave me the ultimate gift and sacrifice by donating her kidney to me. I am incredibly blessed. I love you so much sis."

Meanwhile Francia said: "I am beyond grateful that God would trust me with something that not only saved a life, but changed mine in the process."

The iconic picture came after Selena had cancelled her world tour, and helped to raise awareness of her condition - Lupus.

Sometimes, handshakes can become a talking point for all the wrong reasons, when they don't go quite to plan.

An example of this was when Mr Trump visited Poland with his wife, a few months after taking up the top position in US politics.

The meeting began with the traditional welcome, but it went viral when there was an entirely accidental handshake calamity.

It was a little bit embarrassing for both of them - especially with the world's media there to see it happen.

It's all ok though - we're told they did shake hands properly later on.

Mars Insight celebration: Why do we shake hands?

President Donald Trump and Kim Jong-un have made history