The US space agency Nasa has landed a new robot on Mars after a dramatic seven-minute drop to the surface of the Red Planet.

Confirmation of touchdown came through at 7.53pm on Monday evening.

The mission is going to help scientists to learn about Mars in a way that has never been done before, by exploring deep beneath the surface of the red planet.

The spacecraft is called In Sight and it has been sent to Mars to study marsquakes - that is, earthquakes, but on Mars!

How big actually is space?

Where did Nasa come from? 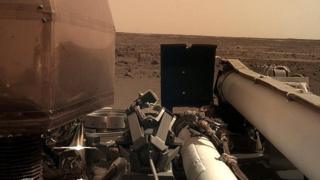 But its job is so much more than just a Mars mission.

The information gathered by the spacecraft will help us to understand the formation and early evolution of not just Mars, but all rocky planets - including Earth.

The InSight mission launched from California at the start of May earlier this year, making it the very first launch to another planet from the west coast of America. (All of Nasa's interplanetary launches before this one had left from Florida.)

Find out more about the mission below.

InSight is what is called a stationary lander. This means it will sit still on the surface of the red planet to carry out its studies, unlike the Mars rover which roams across the surface.

When it is settled on the surface with its solar panels fully expanded, InSight will be 6m long and just over 1.5m wide. 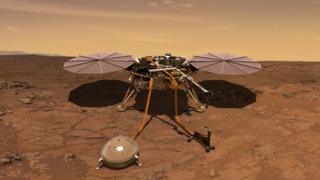 It weighs 360kg, which is about the same as about four baby elephants!

The launcher contains lots of different instruments, all with different jobs, that have been built by scientists all over the world, so lots of teams have helped to make this mission a reality.

What is InSight actually going to do?

To do this, it has three instruments on board - a seismometer, a heat probe and a radio science experiment.

A seismometer's job (labelled SEIS instrument, in the picture below) is to wait patiently on the surface to sense pulses called seismic waves from marsquakes and thumps when meteorites hit the planet. 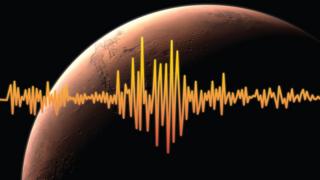 The heat probe is to measure what's going on with temperatures beneath the surface. To do this, it will dig down to a depth of about 5m, which is deeper than any previous drills or probes have gone before.

The radio experiment (labelled RISE antenna, in the picture below) will track the exact location of InSight to work out how much the planet Mars wobbles as it moves around the Sun. This is important to understand more about the iron-rich core at the centre of the planet. 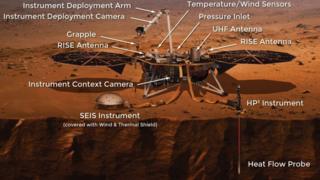 All of these instruments will help scientists to understand better how the planet was formed.

Bruce Banerdt, a key scientist working on the mission, explains: "In some ways InSight is like a scientific time machine that will bring back information about the earliest stages of Mars' formation four-and-a-half billion years ago." 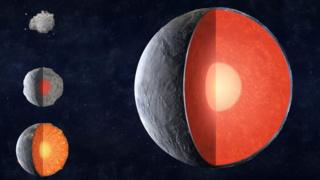 Nasa/JPL-CALTECH
This illustration shows how rocky planets are formed, which is what this mission will be investigating

Studying the planet's interior structure like this will also help scientist to learn more about the early formation of other rocky planets not only in our inner solar system - like Mercury, Venus and Earth - but also planets outside our solar system, called exoplanets.

Why is this mission such a big deal?

Missions to Mars are always a big deal.

According to Nasa, only about four in every 10 missions ever sent to Mars by any space agency have been successful - so Nasa will be hoping this one goes well! 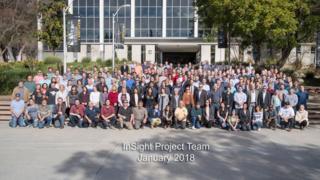 The main thing that makes the InSight mission so exciting is that it is going to be the first one ever that is dedicated to studying what's going on deep beneath the surface of Mars.

Previous ones have always looked at what's going on on the surface, like canyons, volcanoes, rocks and soil.

It will also be Nasa's first mission since the Apollo moon landings to put an instrument called a seismometer on the soil of another planet. (Find out what that is below!)

The mission is made even more special by the fact that it is not only InSight that has headed into the far beyond. 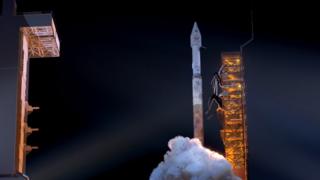 Nasa/JPL-CALTECH
This picture shows what the blast-off will look like!

Two mini-spacecrafts called CubeSats - each no bigger than a briefcase! - have followed InSight to Mars, flying just behind it.

Their mission is to test brand new miniature space communication equipment. The idea is that if they can send information from InSight back to Earth, then it could be an exciting new way that scientists can get data from space missions back to Earth in the future.

If they don't work though, it isn't the end of the world. Scientists can still get information back from InSight without them.

World's most powerful rocket blasts a car into space