Space X launch: Could this mission find life in space? 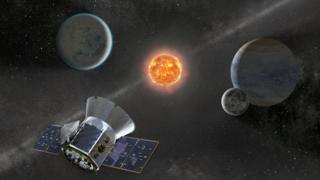 AFP/Getty Images
This illustration shows the Tess spacecraft, which is being blasted off into space on Monday night

An exciting Nasa mission is set to blast off into space on this week.

Tess - the Transiting Exoplanet Survey Satellite - will monitor more than 200,000 stars to see if it can discover new planets outside of our solar system.

It will be looking for everything from Earth-sized planets to enormous gas giants.

Planets outside of our solar system are called exoplanets

According to Nasa, Tess is "the next step in the search for planets outside of our solar system". Exciting stuff!

It will do this by looking at how bright stars are shining, as a momentary dip in the brightness of a star could be caused by a planet moving across it.

When a planet does this, it is called a transit, and that is what Tess will be hoping to spot. 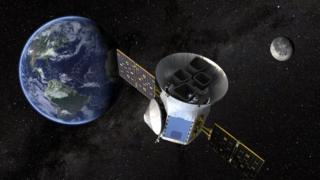 Once it has identified transits like this, there will be more work done to find out more about them - and see if these star-orbiting planets could potentially support life.

How will it do this?

Well, one thing's for sure - Tess certainly has its work cut out.

It will survey the entire sky over the course of the next two years, by breaking it up into 26 different areas.

That is a lot of sky to keep an eye on - and it will focus on one part at a time.

Cameras on board the spacecraft will spend at least 27 days observing each of these 26 areas to see what they spot.

How the brightness of the stars changes - and how often - will tell scientists information about what exactly could be orbiting that star.

It will focus on stars less than 300 light years away. 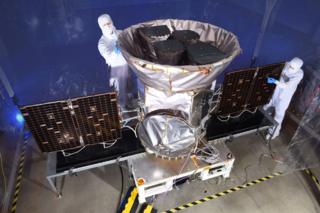 Reuters
Here, scientists are preparing the Tess spacecraft before it is sent up into space

"We're going to be able study individual planets and start talking about the differences between planets. The targets Tess finds are going to be fantastic subjects for research for decades to come," explained Stephen Rinehart, a scientist working on the project.

"It's the beginning of a new era of exoplanet research."

Nasa need to get the spacecraft up there first! So it will blast off from a special launch pad in Florida on Monday night.

With the help of gravity from the Moon, it will start a 13.7-day orbit around Earth.

Sixty days later - and once scientists are happy that it is working as it should - the satellite will get to work on its two-year mission.

World's most powerful rocket blasts a car into space