Vaisakhi - the Sikh New Year festival - is one of the most important dates in the Sikh calendar.

It marks the start of the Punjabi New Year, but it is also a day to celebrate 1699 - the year when Sikhism was born as a collective faith.

It is celebrated on 13 or 14 April, but why is is so important and where did it come from?

History of the festival

Vaisakhi has been a harvest festival in Punjab - an area of northern India - for a long time, even before it became so important to Sikhs.

In 1699, Guru Gobind Singh chose the festival as the moment to establish the Khalsa - that's the collective name given to Sikhs who've been baptised.

The story goes that at the festival, he came out of a tent carrying a sword and said that any Sikh prepared to give his life for his faith should come into the tent.

Five men disappeared into the tent, and the Guru came out - alone - with blood on his sword. This worried the crowds. 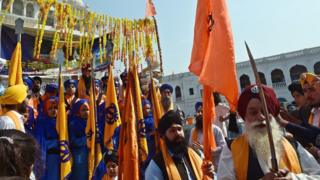 Getty Images
Colourful processions take place to mark the festival. Find out more about how it is celebrated below

That is until the five men then came out from the tent unharmed and wearing turbans.

They became known as Panj Piare or the 'Beloved Five' - and they were to be the first members of the Khalsa.

They were baptised by the Guru who sprinkled them with Amrit, which is the Sikh word for holy water. He also said prayers.

This ritual became the basis of the Sikh baptism ceremony.

To celebrate Vaisakhi, Sikhs will visit places of worship called Gudwaras. These will also be especially decorated for the occasion.

Many people enjoy parades and special processions through the streets called nagar kirtans. 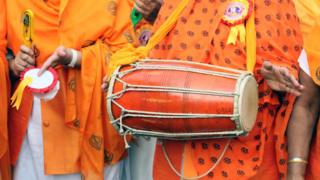 Getty Images
Music is also an important part of the celebrations

'Nagar' means town and 'kirtan' means the singing of hymns from the Guru Granth Sahib, which is the Sikh holy book.

The book is carried in the processions in a place of honour.

Celebrations traditionally include singing and music, as well as reading scriptures out loud and chanting hymns.

Many Sikhs also choose Vaisakhi as the day to be baptised in to the Khalsa brotherhood.

Normally big celebrations take place in the city of Anandpur Sahib in Punjab, which is where Guru Gobind Singh established the Khalsa.

Farmers in the Punjab will also use Vaisakhi as an opportunity to give thanks for a plentiful harvest and pray for a good one in the year to come.