Butterfly numbers have fallen in the UK in the last year.

Annual research by the UK Butterfly Monitoring scheme has found that while butterfly numbers were up in 2016, they have declined to their seventh worst year on record in 2017.

Two species in particular have had their worst year since records began.

The number of Grizzled Skippers has more than halved since the 1970s, and the Grayling's population has dropped by 63% in the last ten years. 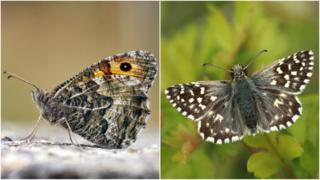 Butterfly Conservation
The Grayling (left) and the Grizzled Skipper (right) have suffered the greatest fall in numbers since records began in the 1970s.

Researchers believe that bad weather caused by climate change is part of the reason for the decline.

Other issues such as damage to natural habitats are also thought to have had a big effect.

Charities like the Butterfly Conservation and the Royal Horticultural Society say there are lots of things you can do to encourage butterflies and moths in your garden.

Read on to find out more about which butterflies have suffered the most losses in the last year.

This beautiful butterfly has seen its population nearly halve. Its numbers have declined by 45% between 2016 and 2017. 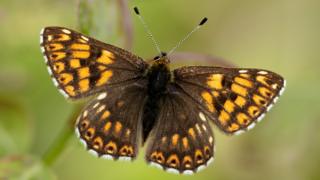 Iain H Leach, Butterfly Conservation
The Duke of Burgundy has declined by 45%

It's a small butterfly that likes to live in grassland and sunny woodland.

Cowslip and primrose flowers are its main source of foods.

The Duke of Burgundy is mainly found in central-southern England, but can also be seen in the Lake District and North Yorkshire moors.

The Lulworth Skipper lives along the south Dorset coast, but sadly its numbers have fallen by 43% between 2016 and 2017. 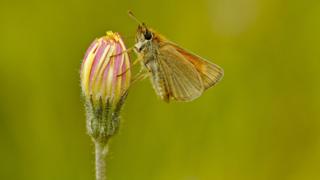 Tony Cox, Butterfly Conservation
The Lulworth Skipper has declined by 43%

This butterfly was named after the village of Lulworth where it was first discovered in the UK.

It mainly lives on chalk grassland and under cliffs on the Dorset coast.

It's as yellow as a lemon! This brilliantly coloured butterfly has declined by 40% between 2016 and 2017. 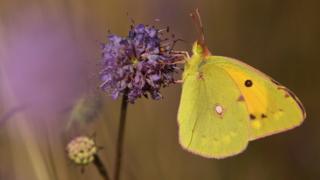 Will Langdon, Butterfly Conservation
The Clouded Yellow has declined by 40%

The clouded yellow is a migratory species, which means it travels across Europe during different seasons in the year.

Clouded yellows feed on clovers and they like to stay in flowery places.

They mainly live in the south of England, but can be found in every country in the UK.

This gorgeous butterfly is usually found in hedgerows and shrubs, but due to lots of hedgerow removal in the UK their numbers have fallen by 35% between 2016 and 2017. 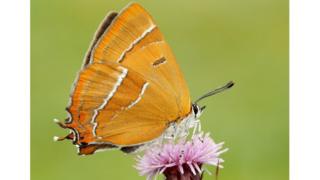 The brown hairstreak can mainly be found in England Wales.

This little butterfly likes to live in small colonies. Their numbers have been rapidly declining in the north of England. Across the UK their numbers have fallen by 31% between 2016 and 2017. 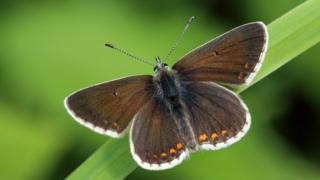 This species lives in sheltered, flowery grasslands - but can also be spotted in unusual places like sand dunes and quarries.

They like to feed on a flower called the Common Rock-rose.