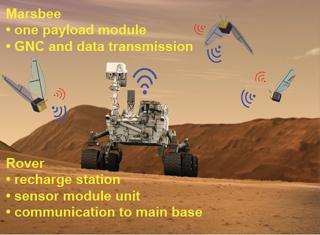 NASA
Here's what the Marsbees might look like! The little flying bots would still need the rover, using it as a hub and charging point

Nasa has given funding to an exciting new project: Marsbees!

A swarm of robot bees would be fitted with all sorts of sensors and communication devices to talk to each other and document their surroundings.

Because of their small size, the drones could cover lots of ground quicker than the Mars rover has been able to.

When their batteries get low, the swarm would fly back to a larger vehicle to charge up and download everything they've seen. They could then set off on another investigative flight.

The swarm will be able to carry out lots of different jobs, like taking readings and collecting data about temperature, or what gasses are in the air. 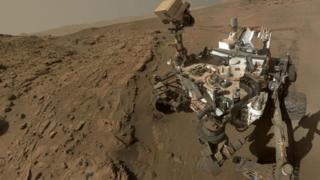 NASA
Before now, we have used satellites, probes and the Mars Rovers to explore the red planet, Marsbees could revolutionise that.

Flying about is much quicker than trying to drive over tough terrain, which the rovers have to do.

Being in the sky has other advantages, for example you can see for much further than with the ground level view the rovers have.

This means the little buzzing bots could spot potential points of interest for a rover to investigate later on.

It could also spot safe routes of travel for a rover, free of obstacles like big craters or rocks.

The project will bring together teams from Japan and America and will take sometime to develop.