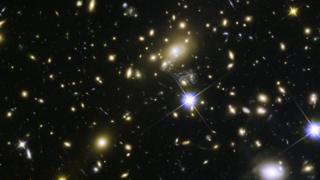 Astronomers have spotted something very special.

It's a blue 'supergiant' which is nine billion light years away.

That makes it the most distant single star ever discovered.

Supergiant stars like this one are extremely luminous and blue in colour.

It's twice as hot as our sun with a surface temperature between a whopping 11,000 and 14,000 degrees Celsius.

Usually scientists can only see galaxies this far away. Galaxies are groups of billions of stars like our own Milky Way.

But beyond about 100 million lightyears it's impossible to make out individual stars - even with the most powerful telescopes.

(A lightyear is the distance light can travel in a year, and it's a long, long way - one lightyear is roughly 6 trillion miles!)

With Icarus something rare happened which meant astronomers could see it.

The supergiant was only spotted in images from the Hubble Space Telescope because its light was magnified 2000 times. 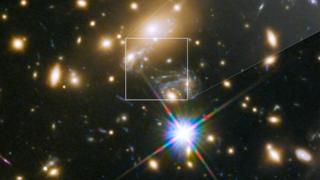 NASA/ESA/P. Kelly
The square shows the position where the star appeared in May 2016.

Scientists say it's a really exciting discovery, especially for learning more about how the earliest stars formed and evolved in the Universe.

Neutron stars: how they make gold in space!