There have been lots of events throughout the year to mark its creation on 1 April 1918.

One of the biggest events took place on 10 July 2018, when the RAF staged a spectacular flypast over London.

Thousands of people gathered on the Mall outside Buckingham Palace, while the Queen and other members of the Royal Family watched the flypast from the palace balcony.

The show involved over 100 aircraft, making it the largest number of military jets over London in recent times. Up to 1,000 people were also involved.

More about the RAF

What does the Royal Air Force do?

The RAF was the world's first ever independent air force - a totally separate service from the British Army and Navy, acting under its own command.

From its early days in World War One to playing a key role in World War Two and rescuing thousands from natural disasters across the world, the RAF has been there for some of the most historic occasions of the past century.

Let's take a look at some of the most important aircraft from its history.

The beginning: World War One 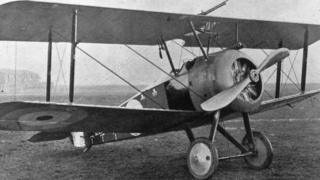 This picture shows one of the first airplanes used by the RAF - the Sopwith Camel.

The Sopwith helped bring victory to Great Britain and the countries working with it, known as the Allies, in World War One.

It was one of the highest scoring fighters of World War One, taking down an impressive number of enemy planes. 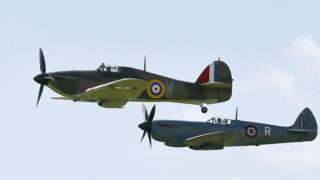 Getty Images
The Hurricane, top, and Spitfire planes were brought into action during the Second World War

On the 3 September 1939, Britain and France declared war on Germany. This was the beginning of World War Two - a war no one thought would happen after the horror of World War One

With this new war came new threats from above and new technology was needed. Enter the Spitfire and the Hurricane, which would both be vital in protecting the UK from air attack.

The Spitfire was produced in larger numbers than any other British aircraft before or since. The Hurricane was also an impressive fighter and played its part in achieving the victory of 1945. 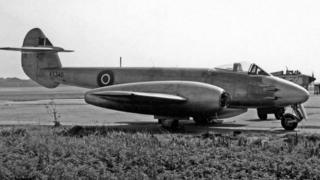 Wikicommons
The Gloster Meteor was the first British jet fighter

Towards the end of World War Two came a massive breakthrough - an aircraft with a jet engine in it.

Called the Gloster Meteor, the jet could travel further and at much higher speeds than previous British aircraft.

After the war, the Meteor was in high demand and was even sold to Australia. 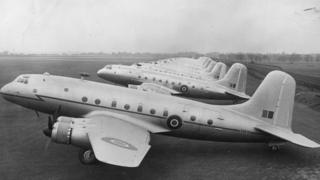 Topical Press Agency
The Handley Page Hastings C1 transport aircraft, lined up in Hertfordshire, served in many roles for RAF and took part in the Berlin Airlift

After World War Two, Germany was occupied by Allied forces, including troops from Britain, America, France and the Soviet Union.

The Soviet Union wasn't happy about some of the things that other Allied powers were doing in Germany, so they surrounded Berlin and stopped supplies reaching the city.

The RAF was part of a team who airlifted supplies to the city. They brought in food, medical supplies and many other items to keep Berlin running.

During the year it was in action, the Berlin Airlift saw over 200,000 flights delivering up to 8,893 tonnes of essentials each day. 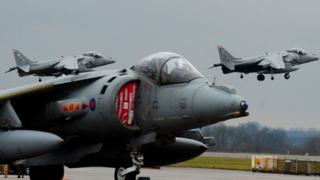 This impressive looking machine is the Harrier jump jet.

The Harrier was the most successful VTOL (vertical take-off and landing) plane of its time and has been used all over the world by the RAF, the Royal Navy and also American and Indian forces.

Designed to operate without a runway, the Harrier could stop in the air and land straight down, much like a helicopter. 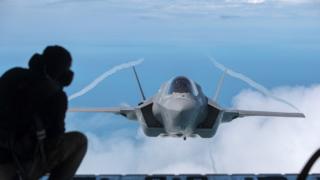 Above is the future of the RAF - the F35 Lightning II.

The F35 is another vertical take-off and landing aircraft, similar to the Harrier, but this one is totally packed with 21st-Century tech.

It has advanced stealth technology to keep it safe from attack, amazing manoeuvrability and it is fast enough to break the sound barrier.

Check out this high-flying cleaning job!

Guide: Who are the Red Arrows?

What does the Royal Air Force search and rescue do?