What is happening in the Democratic Republic of Congo?

The Democratic Republic of Congo (DR Congo) is a large country in central Africa where there is a lot of conflict.

The land in the DR Congo has a lot of natural resources like oil, minerals and precious metals, which can make a country more wealthy.

But despite this, millions of people who live there are incredibly poor and are suffering because of fighting that is going on there. 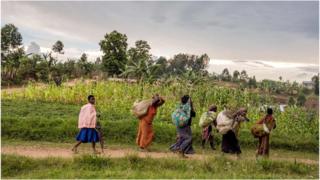 During 2017, 1.7 million people were forced to flee from their homes, according to aid groups, which have said that DR Congo is one of the countries worst-affected by conflict displacement, which is when people have to leave their homes because of fighting.

Read on to find out more about the situation and how it came about.

Who is in power? 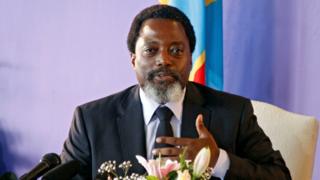 Reuters
Joseph Kabila is the current leader of the DRC

The leader of DR Congo is a man called Joseph Kabila.

He took over power when his father Laurent was killed in 2001. He was elected as president in 2006 - a vote that was generally accepted as being fair.

He then won the next election in 2011, but the vote was criticised by other countries and people who were opposed to the government disagreed with the result.

The rules of the country say that a president can only be elected twice, and do two terms in the job, before he must let someone else do it. 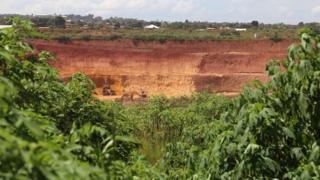 AFP/Getty Images
Areas of the country are rich in natural resources, such as this copper and cobalt mine

Kabila's second (and therefore final) period in the job officially came to an end in December 2016 - but there were no elections held to decide who would take over power.

A political deal was reached that meant Kabila would stay in power until late last year, as long as he worked alongside others.

But elections were re-scheduled for the end of 2018.

Opponents say that Kabila is clinging on to power when the rules of the country say that it is time for him to give it up, but his supporters disagree with this and say he has no intention of staying in power for ever and is working to organise the elections.

Divisions between people on different political sides are said to be one cause of fighting that has been happening in the country.

Where has the fighting come from?

Ever since the country won independence from being ruled by Belgium in 1960, it has had a history of conflict.

As well as political divisions, there is a lot of violence between different ethnic groups, which can be a problem in some countries where different groups of people have different cultural backgrounds and beliefs.

There was a big civil war in DR Congo between 1997 and 2003, which claimed millions of lives as a result of the fighting, or because of diseases and not having enough to eat. 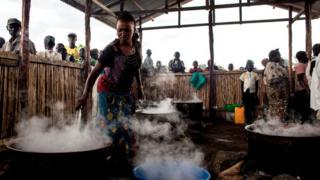 Getty Images
Here, a volunteer can be seen preparing food for people who have had to flee from their homes as a result of fighting in the DRC

Many other countries nearby got drawn into this civil war, so it became known as Africa's Great War.

But after the civil war had ended, the fighting did not stop, with armed groups still spreading violence in areas in the country.

In 2015, people were killed in protests against changes to the law, which people who were against the government said would make it easier for President Kabila to stay in power after the point when he should leave the job to allow somebody else to do it.

What is the situation now?

There is still a lot of conflict in the DR Congo and millions of ordinary civilians are in desperate need of help.

As well as the violence between different ethnic groups, many say the fighting has political reasons and that the current leader is "spreading chaos" to prevent elections from happening, in order to hold on to power. His supporters disagree with this.

Recently, more than 40 people were killed in a village called Maze, in an attack which has shocked the world. 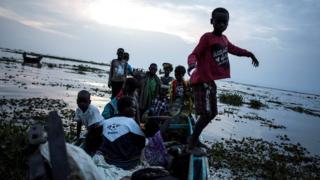 The UN, an international group which aims to get countries to work together to bring peace, says that £1.2 billion is needed to stop a terrible humanitarian crisis in the country.

Figures from the group suggest that over 1 in every 10 children in the world that is at risk of starvation is currently in DR Congo. 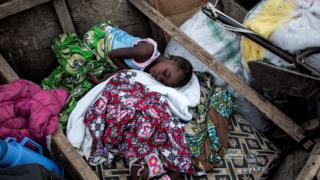 AFP/Getty Images
In this photo, a girl is having a sleep in a boat, as she journeys to try to find safety

But the DR Congo government says that the UN is exaggerating and giving the country a bad image.

There are currently just over 15,000 UN workers in the country who are trying to improve the situation.

But that is difficult when the country is the size of the whole of western Europe put together.

Many people in DR Congo are waiting for elections to happen and it is hoped that new leaders can help to bring much-needed peace to the country.

South Sudan famine: What is happening and why?

Refugee crisis in Europe: How war separated me from my family