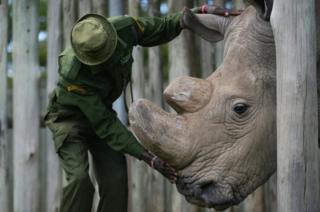 Sudan was 45 and lived at the Ol Pejeta Conservancy in Kenya.

He'd been ill for months and was eventually put to sleep after getting much worse.

His death means there are only two of this type of rhino left alive in the entire world.

They are both female - and are Sudan's daughter and granddaughter.

Why is this kind of rhino so rare?

Rhinoceroses are the second-largest land mammal after elephants.

There are around 20 thousand southern white rhinos living in the wild. But the northern rhino is critically endangered - with just two now left.

Poaching for their horns meant that white rhinos were almost wiped out in the 1970s and 1980s.

The last few wild northern white rhinos in the Democratic Republic of Congo were killed around 15 years ago in the early 2000s.

The World Wide Fund for Nature reported that the northern white rhino was extinct in the wild in 2008.

Is there any hope for the species in the future? 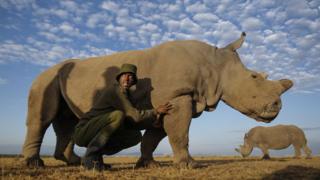 EPA
The only two northern white rhinos left, Najin (left) and Fatu (right), have lived under armed guard in Kenya to prevent poaching

In 2009, there were only four northern white rhinos - two males and two females. They lived in a zoo in the Czech Republic and were moved to a reserve in Kenya.

It was hoped the two pairs would breed - but there were no successful pregnancies.

Scientists now hope they may be able to use a special technique called IVF to try to help save the species.

Before Sudan died, some of his genetic material was taken and carefully stored.

Conservationists hope they'll be able to use this so the two females can have their own calves one day.

How rhinos use poo to communicate with each other